The annual award, established in 1998, recognizes four outstanding CSU faculty members and one staff member who have distinguished themselves by exemplary contributions and achievements.

For more than 23 years, Fowler has helped shape Cal Poly’s top-ranked public architecture program. He is nationally recognized as an influential innovator in the field of architectural education and has inspired generations of students who have gone on to achieve success in both their personal and professional lives.

“Tom is an educator’s educator, admired for his collegiality, creativity, empathy, humor and undying enthusiasm for design students and design teachers,” said Christine Theodoropoulos, dean of the College of Architecture and Environmental Design (CAED). “Our Architecture Department is a pretty special place where teaching is excellent, inspired and also a bit magical, and Tom is an essential component of that.”

Fowler promotes discovery across new media and disciplines and in the service of communities. A longtime champion of collaboration, he engages students and colleagues from across the university — including those in such fields as English, computer science, business, engineering and construction management — in the architectural design process. 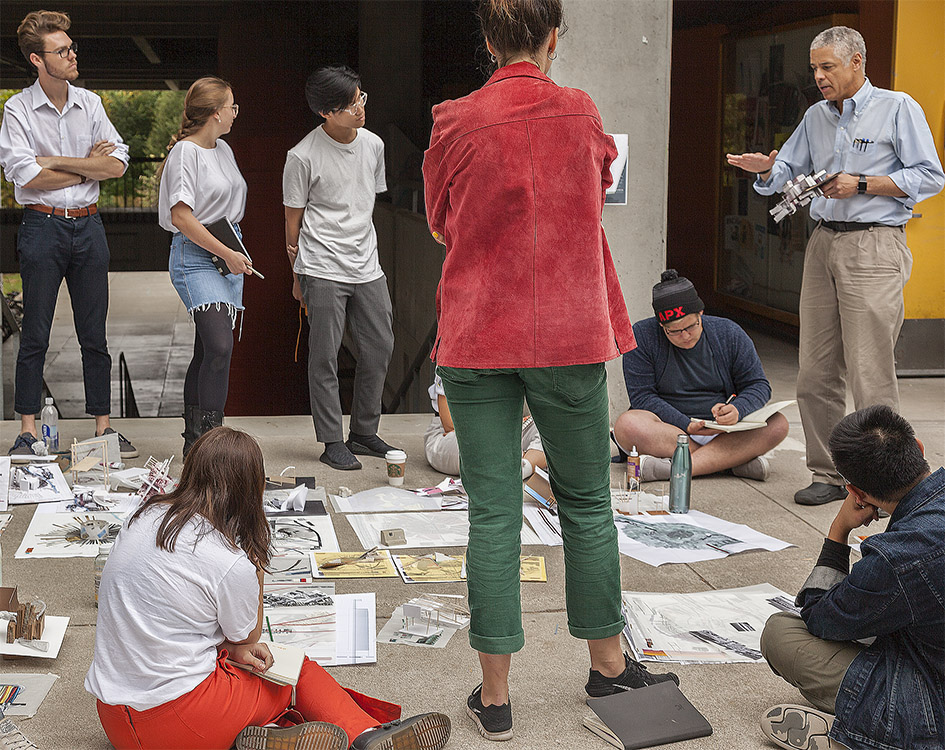 Photo Information: Fowler, IV, shown right, engages with architecture students outside of their design studio on the Cal Poly campus.

In 2014, Fowler helped create the design for the future Same Polytechnic College in Tanzania, Africa, a collaboration that included Cal Poly, industry partners and a nonprofit client. Cal Poly students in the CAED and the College of Engineering are creating a master plan and designs for classrooms, laboratory spaces, support facilities, site infrastructure and on-campus housing for 1,200 students.

Fowler’s passion for education extends to assist underserved communities as well. Internnect, a program he developed with a former student, exposes high school students to the architecture profession. The free program brings more than 60 participants to Cal Poly twice a year.

“Expanding the creative building design process beyond the walls of the classroom has been the most inspirational aspect of collaborating with the students over the years,” Fowler said. “In many ways, it’s allowed them to become my teachers, showing me what is possible.”

The award winners were honored today, Jan. 22, in a ceremony at the Chancellor’s Office in Long Beach. Each recipient receives a $20,000 award.

Fowler is one of three Cal Poly faculty members to receive the Wang Family Excellence Award since its inception. Music Professor Craig Russell was selected in 2007, and kinesiology Professor Suzanne Phelan was named a winner in 2018.

Over the years, Fowler has received 18 teaching awards, including the 2018 Cal Poly Distinguished Teaching Award. He was named one of the nation’s 25 most admired educators by DesignIntelligence in 2012.

“Tom has been instrumental in the architectural education and professional development of so many Cal Poly architecture graduates,” said Architecture Department Head Margot McDonald. “He continues to serve as a role model for students of all ages, including many first-generation students from California’s Central Valley, for whom Cal Poly is their first on-campus experience. His innovative approaches to teaching and his caring capacity for the human endeavor are unparalleled.”