The rules prescribed that at least one student be an underclassman – freshman or sophomore – and at least one be from a different discipline. ARCE Faculty Member Kevin Dong served as the team’s faculty advisor.

The competition required the design and construction of a two-story timber structure. Students produce design drawings, a technical report, a poster and a structure that is constructed on site in a 90-minute timed event. The structure features a cantilevered beam on which a 150 pound weight is hung and its deflection is measured, and students must calculate the carbon footprint of the structure. After construction, students are graded on a 10-minute presentation in which all six team members must participate.

The Cal Poly ARCE team won by making some unique design and construction decisions. They used balloon framing for their construction rather than the more standard platform construction used by all of the other competitors. Their structure featured a curved roof and an architectural protuberance on the front wall that added to the aesthetic quality of the building.

“The competition established an invaluable bridge between learned classroom concepts and hands-on practice for engineering and construction management students,” said team captain Lilliann Lai. “Without a doubt, our team has grown exponentially in terms of structural design and analysis confidence, handyman and handywoman prowess, and timber-construction literacy. The opportunity to create problems, especially unintentionally, and learn to problem-solve them in the moment proved to be one of the most appreciated experiences throughout the process of designing and building.”

Twelve teams were originally scheduled to compete with only half of those actually competing. Coming in second and third after Cal Poly were UCLA and the University of Kentucky. The others programs were from Sacramento State, University of Minnesota, and University of Southern Florida. The winners were announced at the NCSEA opening reception and were honored by NCSEA President Jon Schmidt.

The overall competition is sponsored by the American Wood Council, the American Plywood Association, and Simpson Strong-Tie. Cal Poly’s team was supported through generous donations provided by C.W. Howe Partners Inc. in Culver City and Lionakis in Sacramento.

“This is a great competition,” said Allen Estes, head of Cal Poly’s Architectural Engineering Department. “It requires academic knowledge, creativity, constructability and presentation skills — and it is fun, besides. I thank the industry firms that created and supported this competition and the two firms who generously sponsored our team.”

For nearly 75 years, the Cal Poly architectural engineering (ARCE) program has embodied the university’s Learn by Doing credo. Focusing heavily on structural engineering with an emphasis in seismic design, the ARCE curriculum is a unique blend of theory and practice. The program is highly interdisciplinary, integrating architecture studios and construction management courses, thus providing students with a thorough understanding of the broader design/construction process. The acclaimed four-year Bachelor of Science degree is ABET accredited, and graduates typically become licensed as structural engineers. With the ARCE program’s in-classroom innovation, connection to industry, and high-job-placement rate, graduates are among the most sought after in the country and have gone on to shape our built environment. To learn more, visit arce.calpoly.edu. 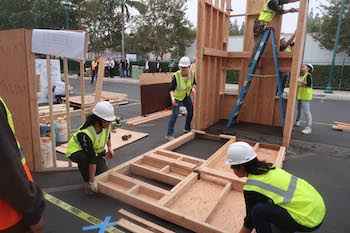 Cal Poly Students Assemble at Timber Competition — Cal Poly students assemble their competition structure using balloon framing, a building technique where both floors are created as one piece and then they are tilted up for faster assembly. 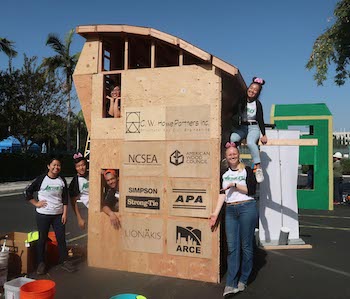