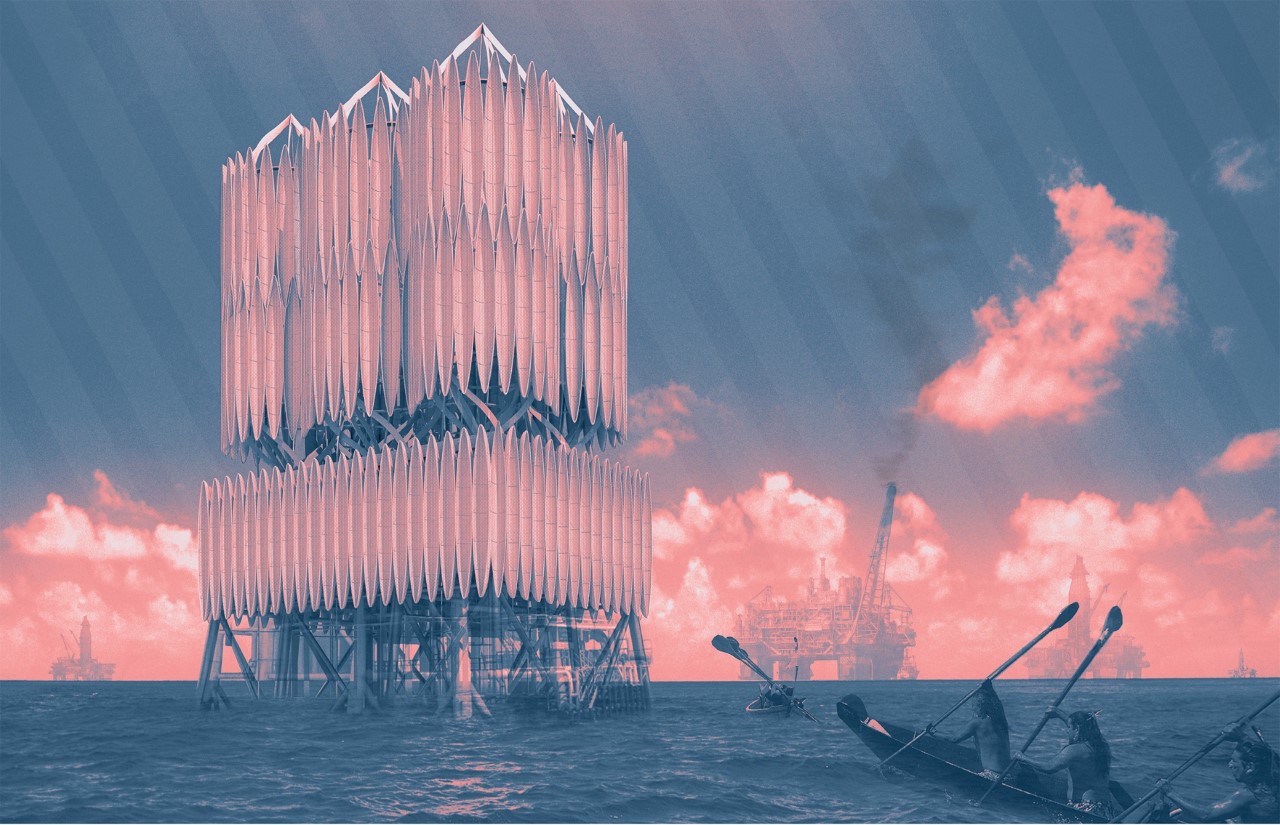 Student project chosen from a field of 900 participants from more than 60 universities in the U.S., Canada and Puerto Rico.

The 2022 ACSA/AISC Steel Design Student Competition recognized 18 exceptional projects in two categories, which explored a variety of design issues related to the use of steel in design and construction, offering upper-level architecture students from more than 60 colleges and universities across the U.S., Canada and Puerto Rico the opportunity to develop project designs using steel as the primary material.

Among other winning recipients, Patavin was honored for his submission “Tomols,” a type of vernacular canoe built by the Chumash people, and a retrofit of a 2015 decommissioned oil platform by Veneco called “Platform Holly," just two miles off the coast of Santa Barbara, CA. The project’s program was to design a cultural center for the Chumash that could function as a public resource for understanding its history and connection to the ocean, which supports the principles of the future Chumash Preservation Pacific Coast area, north of the oil rig.

Patavin designed his award-winning project to memorialize how the Chumash people traversed the rugged waters, living humbly off what the land had to offer.

“In the iterative process (of design) I saw a resemblance to the native canoes that the Chumash used, called ‘tomols’ — which used naturally occurring seeping oil to water seal these boats for ocean travel — and thought that was really interesting and went from there,” Patavin stated during an interview with Field Notes.

His conceptual narrative described their way of living as demonstrating great courage, sustainability and resilience, standing in stark contrast with today’s exploitation of nature by the oil industry.

Architecture and Design Professor Thomas Fowler, who served as Patavin’s instructor in the 20-week, double-quarter, comprehensive building design studio where the project was refined, also commended Patavin for his project’s success despite its unique challenges.

“It wasn’t only complicated because this all-steel structure was built in the late 1950s and anchored to the bottom of the ocean 200 feet down, but it’s atypical that students would have to understand the surface ocean as context for the design project, in addition to attaching a new structure within and around the existing structural system that had a different purpose when built,” Fowler emphasized.

Having assigned students land-based building design projects for nearly three decades teaching at Cal Poly, this was the first time Fowler had students design a project on an abandoned oil rig in the middle of the ocean. Moreover, Fowler praised Patavin for his consistent workflow operations in developing the project.

“He did an excellent job of consistently curating his design discovery process in telling his evolving story, and my role as the instructor was in a kind of choreographed call-and-response framework that provided a rich support for the creative energies in this studio environment,” Fowler added.

The 2022 ACSA/AISC Steel Design Student Competition judges correspondingly described “Tomols” as elegantly using steel structure to demonstrate the design concept and message of Chumash history and its cultural value. They underscored the detailed axonometric drawing and the steel coming together allowing the project to feel grounded, praising the overall design as structurally clear and consistent throughout.

Patavin’s first place design was drawn from a pool of 1,200 participants from institutions such as Auburn, Princeton, Syracuse, Texas A&M, Rochester Institute of Technology, and UC campuses, including Berkeley.

The first place prize is $4,000 — with the faculty member being awarded $1,200 — and the three winners in each category splitting $20,000 in prizes, while earning the opportunity to have their work exhibited at the 2023 ACSA Annual Meeting and the 2023 AIA National Convention. Their work will also be published in a competition summary publication.

With more than 1,900 students, Cal Poly’s acclaimed College of Architecture and Environmental Design (CAED) offers a unique blend of eight degree programs in five closely related departments: architectural engineering; architecture; city and regional planning; construction management; and landscape architecture. For 75 years, the CAED programs and its 16,000 alumni have served as a positive influence on the forces that shape the planning, design and construction worlds. Learn more at www.caed.calpoly.edu.

The American Institute of Steel Construction (AISC), headquartered in Chicago, is a nonpartisan, not-for-profit technical institute and trade association established in 1921 to serve the structural steel design community and construction industry in the U.S. AISC’s mission is to make structural steel the material of choice by being the leader in structural-steel-related technical and market-building activities, including specification and code development, research, education, technical assistance, quality certification, standardization, market development, and advocacy. AISC's long tradition of service to the steel construction industry provides timely and reliable information. In Modern Steel Construction Magazine, a podcast of interviews of first place winners appears in the field notes section of this publication. Visit www.aisc.org.