“There was something special about all four of this year’s teams,” said Construction Management Professor Greg Starzyk, who has advised teams over the last six years in this competition’s open categories. “They worked so well together that they made the work appear effortless. You could feel the trust and support that they gave to each other.”

ASC Region 3 consists of schools from Illinois, Indiana, Kentucky, Michigan, Ohio and Wisconsin. The competition includes a total of seven categories; all are open to ASC Region 3 schools, while four are open to teams from any ASC-affiliated school in the nation. Cal Poly students competed against five to nine teams in the four open categories.

The four Cal Poly teams, consisting of six students each, began practicing in the spring quarter. The Region 3 competition was held Oct. 17-20, leaving the Cal Poly teams with just less than a month to fine-tune their skills after fall quarter started in late September.

Fourth-year construction management student Harrison Woods, a member of the Concrete Team, said he spent his summer internship preparing for this competition.

“Over the summer, I participated in the carpenter’s apprenticeship internship with a concrete subcontractor, Largo Concrete Inc.,” Woods said. “While on the jobsite I asked as many questions as I could, trying to form them with the needs of my competition team in mind.”

During the competition, the teams are given a short window to turn in their materials. The majority of work takes place on the Thursday of the competition, with the teams sequestered in their rooms. The deliverables —bid proposals, estimates, schedules, change orders and more — are submitted Thursday night, and by Friday morning their presentations are turned in. Teams are then given additional time on Friday to practice how they will present to the judges.

“The greatest challenge is time management,” said fourth-year construction management student Arlen Hartoonian, also a Concrete Team member. “Given that we had a little more than 24 hours between the assignment of the prompt and the meeting with the judges, most would think that there would be a surplus of time. However, our attempt to understand the project as thoroughly as possible meant every hour was valuable to us.”

For more information about Cal Poly’s Construction Management Department and to see photos of the winning teams, go to construction.calpoly.edu/content/competitions-and-awards/asc-3.

About Cal Poly’s Construction Management Department
The College of Architecture and Environmental Design’s Construction Management Department — soon to be celebrating its 50th anniversary — is one of the most respected programs in the country. With nearly 530 full-time students, it prepares graduates to lead project teams of other professionals in the completion of complex infrastructure projects. These graduates are actively recruited by more than 200 firms spanning the globe. For more information, go to construction.calpoly.edu/. 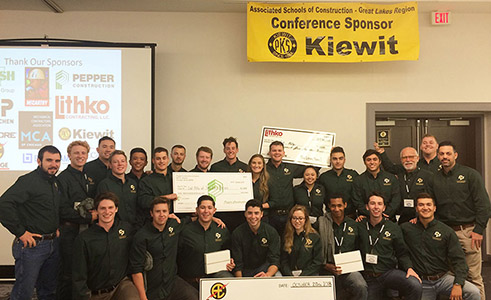