Cal Poly's construction management teams earned more than twice as many awards as other teams in the competition as seen in graph. We congratulate all of the CM teams that competed and contributed to such a successful outcome for the program.  And we thank their faculty and industry advisers for their guidance and support. Read the full story below this photo gallery that features the six first-place teams. 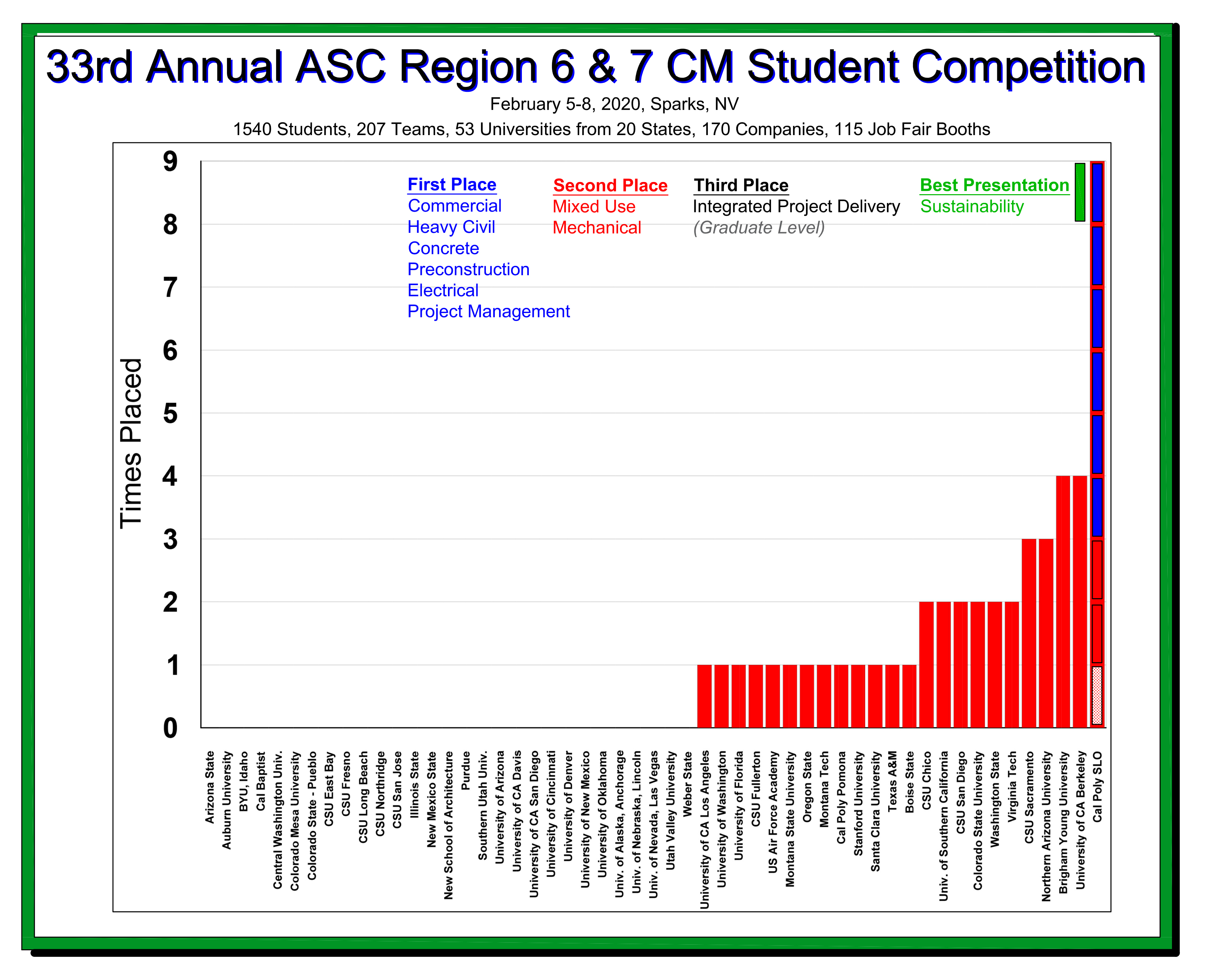 The Cal Poly teams earned more than twice as many awards as their nearest competitor with six first-place trophies, two second-place awards, one third-place award, and an award for best presentation at the competition, held in early February in Sparks, Nevada.

Cal Poly construction management students have been competing in the ASC region 6 and 7 competition since its inception in 1988. Their impressive success at the 2020 competition marks their best year yet.

“This very special achievement by our students is a testament to the success of Cal Poly’s Learn by Doing methodology,” said Jeong Woo, Construction Management department head. “It also reflects the high-quality classroom teaching our students receive. No other CM program in the country was able to match this team record of 10 awards, including six first-place wins.”

The student teams spend months preparing for the competition, working under the guidance of faculty coaches and team sponsors, many of whom are Cal Poly alumni.

“It is a valuable learning activity,” Woo said. “The competition provides opportunities for our students to gain practical knowledge by working with their peers on the problems provided by the competition judges. This helps our students broaden their horizons and decide what they want to do after graduation.”

“Taking home first place in the ASC Commercial competition was the highlight of my Cal Poly construction management career,” said Avery Spector, captain of the Commercial team. She and teammates Parker Doshier, Marco Reza and Will Myers started preparing last May.

“As the team captain, I found it challenging to keep everyone engaged with such a long practice period,” Spector said. “With four returning team members, we worked collaboratively and with more composure this year during the competition, which is very hard when you’ve been seated at a computer for 20 hours and are watching your second sunrise in a row together.

“I am so thankful for the supportive and hardworking community that I’ve found in the Cal Poly construction management program.”

Woo also credited industry partners for maintaining close relationships with the faculty and students and providing financial support to the department.

“Our friends in industry not only provide much-needed funds for a variety of purposes,” Woo said. “They also visit campus, meet with students and help our teams succeed.”

The Construction Management Department - soon to be celebrating its 50th anniversary - is one of the most respected programs in the country. With more than 500 full-time students, it prepares graduates to lead project teams of other professionals in the completion of complex infrastructure projects. These graduates are actively recruited by more than 200 firms spanning the globe.

Join us at 5 pm on Wed. March 3rd via Zoom for Charles Davis!