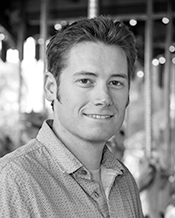 David Abair has a job that everyone wants, even if they don’t know the slightest thing about architecture. Abair graduated summa cum laude from Cal Poly in 2007 with a bachelor’s degree in architecture. Straight from there, he started his work as a Walt Disney Imagineer. In his first four years, Abair worked on attractions for the Disney California Adventure expansion including The Little Mermaid ~ Ariel’s Undersea Adventure and Radiator Springs Racers. During this time he was a facility designer and lead modeler. In 2011, he became a project lead for the Enchanted Storybook Castle at Disney’s new theme park in Shanghai, China. As project lead he worked on all aspects of the architectural design, from the beginning sketches all the way through coordinating construction documents with the numerous other disciplines involved in creating the castle.

When describing his first few projects David said, “Working on those attractions enabled me to learn from some of the very best minds at Imagineering, crafting some of the most complicated projects we have ever done. I experienced all aspects of the design process from very early sketches all the way through construction, learning all about those puzzle pieces and how they eventually fit together. All the while my wonderful mentors continued to encourage my growth by challenging me with newer and bigger tasks.”

These experiences prepared him for his next role as senior concept architect for Millennium Falcon: Smugglers Run, which will be located in Star Wars: Galaxy’s Edge, a new attraction at both Disneyland Resort in Anaheim, California, and the Walt Disney World Resort near Orlando, Florida.

Abair grew up watching all of the Star Wars films on repeat, which led him to construct model kits, create costumes and build lightsabers out of spare parts from his father’s workshop. This creativity helped him land his first job at an architecture firm in high school. He brought some of his projects to an interview, showed the firm what he could make, and was hired because of his creativity. At that job, Abair met a Cal Poly architecture student who was about to take off to Italy for his year abroad. This interaction led him to realize, “Wait, I can go to school and study architecture in Italy for a year? I’m set!”

Today, his passion for Star Wars continues to pay off. Being such a huge fan enabled Abair to “make informed design decisions from a fan’s perspective and add details that someone not as familiar might have missed.” As the lead concept architect for Millennium Falcon: Smugglers Run, Abair led teams through design and implementation of the highly detailed attraction.

“The Millennium Falcon is my all-time favorite movie spaceship. I know it inside and out. I read all the books as a kid, had all the cut-away drawings, built all the model kits, assembled all Legos, and played all the video games. So, getting to work on the Millennium Falcon for real was a dream come true,” said Abair.

Then in 2017 Abair was appointed to overall field concept architect for all of Star Wars: Galaxy’s Edge, which includes a wide array of responsibilities that involve coordinating with different departments and their individual parts of the project. All of his various responsibilities boil down to one thing, making sure that the architecture of the Star Wars story comes to life. Seeing that story finally built in the real world was the most exciting part of the project for Abair. Even so, he emphasized that creating such grand scale projects involves a large team and an organic development over time.

“Everything we do starts with a story. That story then sparks ideas, sketches, conversations, research, debates, etc. We all have our various areas of expertise, so we work together to bring all those ideas into one vision. Over time, certain concepts prove stronger than others and naturally work their way to the top. Design of these attractions is a lot like putting together a very complex jigsaw puzzle. It’s just that we don’t yet fully know the picture on the puzzle box, and we are shaping the pieces as we go. It is only possible because of the extremely talented team of Imagineers working together,” Abair said.

During his time at Cal Poly, Abair learned many life lessons that have aided him in his architecture career. “Architecture at Cal Poly was intense. The school’s Learn by Doing motto was no joke. But it was that intensity, and encouragement to roll up your sleeves and ‘get dirty’ that ultimately prepared me for my career at Disney. We were taught to be bold, to seek out the answers rather than wait for someone to provide the solution.”

He also offered some advice for those who aspire to be an Imagineer. “Always do your best work, even when you think no one is looking. Solve more than you were asked to solve. Be humble and assume those with more experience than you know what they are talking about. Learn from their wisdom even if it seems to contradict what you think, because they probably know something you don’t. You will grow stronger and faster in your profession as a result. Be passionate and intense in your work, but don’t forget to have fun. You never know when a spaceship model you built when you were 12 could lead to being architect of the Millennium Falcon.”

After finishing up his work on Star Wars: Galaxy’s Edge, Abair will be moving on to a new magical project, he just can’t tell us what it is. Star Wars: Galaxy’s Edge opens on May 31, 2019, at the Disneyland Resort and August 29 at Walt Disney World Resort in Florida (with the exception of a second attraction, Star Wars: Rise of the Resistance, which opens later this year).

A preview of the attraction Star Wars: Galaxy's Edge and the most famous ship in the galaxy, Millennium Falcon: Smugglers Run

Star Wars: Galaxy's Edge will open May 31, 2019, at Disneyland Park in Anaheim, California, and Aug. 29, 2019, at Disney's Hollywood Studios in Lake Buena Vista, Florida. At 14 acres each, Star Wars: Galaxy's Edge will be Disney's largest single-themed land expansions ever, transporting guests to live their own Star Wars adventures in Black Spire Outpost, a village on the remote planet of Batuu, full of unique sights, sounds, smells and tastes. Guests can become part of the story as they sample galactic food and beverages, explore an intriguing collection of merchant shops and take the controls of the most famous ship in the galaxy aboard Millennium Falcon: Smugglers Run. (Disney Parks) 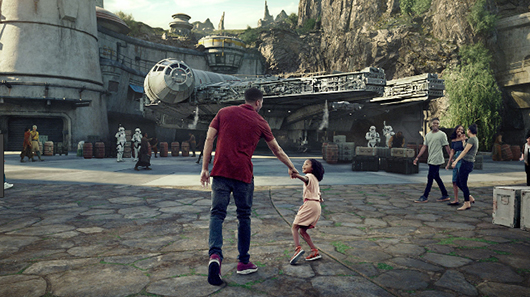 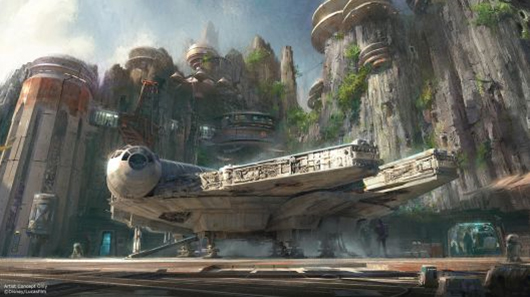 Millennium Falcon: Smugglers Run in Star Wars: Galaxy’s Edge will let Disney guests explore memorable areas of the fastest ship in the galaxy before taking the controls in one of three unique and critical roles. Star Wars: Galaxy’s Edge will open May 31, 2019, at Disneyland Resort in California and Aug. 29, 2019, at Walt Disney World Resort in Florida. (Disney Parks) 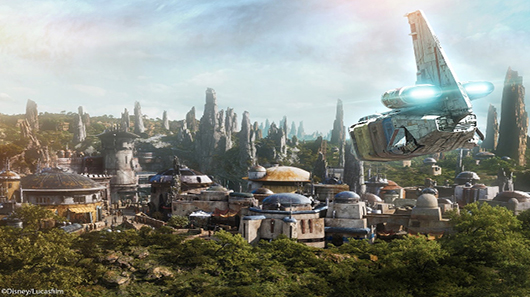 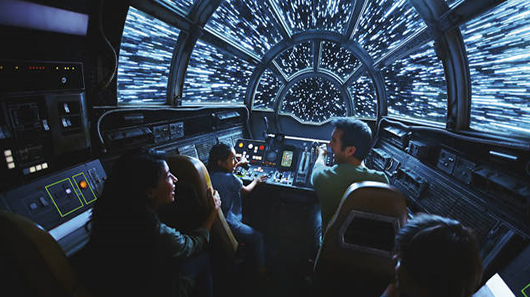