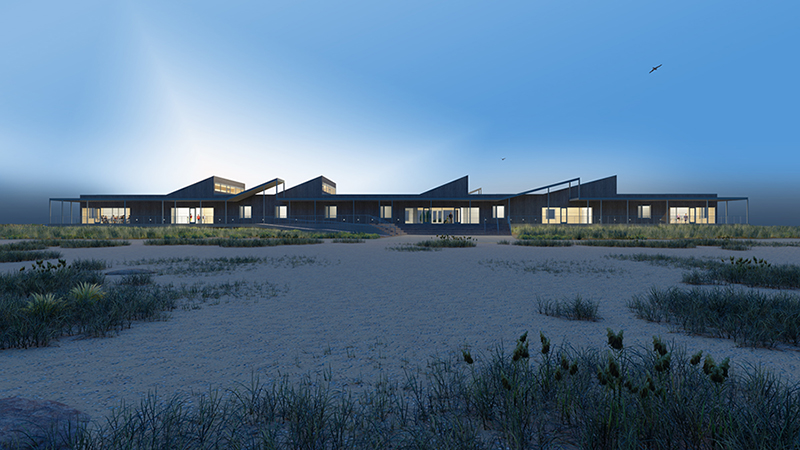 nARCHITECTS is a Brooklyn based architecture office led by Principals Eric Bunge and Mimi Hoang. The practice was founded with the goal of addressing contemporary issues in architecture through conceptually driven, socially engaging and technologically innovative work. Their work instigates interactions between buildings, public space, and their dynamically changing contexts. In recent projects such as Carmel Place (New York City’s first micro unit building), the design center A/D/O, the NYS Equal Rights Heritage Center, and the renovation of Chicago Navy Pier, nARCHITECTS is tackling the most pressing issues that our cities face – how we live, work and activate public spaces in response to our nation’s changing demographics, housing shortage, evolving workplace technologies and need for equality in the public realm.

The firm’s awards and honors include a 2017 national AIA Institute Honor Award in Architecture, the 2017 NYS AIA Firm of the Year, a 2016 Academy of Arts and Letters Award in architecture, the AIANY Andrew J Thomas Award for Pioneers in Housing, and the 2006 Architectural League’s Emerging Voices. The firm has been ranked within the top 10 in the US in the design category for the past five years by Architect Magazine.

ERIC BUNGE, FAIA, is a co-founding Principal of Brooklyn based nARCHITECTS, and an Adjunct Associate Professor at GSAPP/Columbia University. Eric received a Master of Architecture from Harvard Graduate School of Design and a B.Arch from McGill University. He previously taught at Parsons School of Design, R.I.S.D. and Columbia/Barnard Colleges, and as a visiting professor at Harvard University, Yale University, UC Berkeley and University of Toronto. Eric regularly lectures on the work of nARCHITECTS, new housing paradigms, and other contemporary issues in architecture.