Cal Poly teams were made up of nearly an equal number of women and men. The university earned nearly three times the number of trophies than its closest competitor, Idaho’s Boise State.

Senior Dara Lin, who is majoring in construction management and architecture, participated with the Integrated Project Design team, which earned a second place in the graduate division. The team included all new members. “Our hard work paid off,” said Lin, of Boston. “Although we hadn't participated in the ASC competition before and the format was all virtual, we were able to collaborate effectively, and I’m proud of what the team was able to achieve."

The 2021 event marked the ASC’s 34th annual competition, held virtually Feb. 3-6. Cal Poly construction management students have been participating in the competition since its inception.

The student teams spend months preparing for the competition, working under the guidance of faculty coaches and team sponsors, many of whom are Cal Poly alumni. Because it was held virtually this year, students had to prepare quite differently. For the first time in the competition’s history, students were not allowed access to labs and rooms for practice runs.

“We prepared, practiced and expected the unexpected,” said Electrical Team member Amanda Schrader of Huntington Beach. “Ultimately what it came down to was our team collaboration, determination and work ethic. It was an incredible opportunity for all of us. Our biggest takeaway is that team moral and dedication will always be a strong suit in the industry.”

“The sponsorships were instrumental in helping us shift to a virtual work environment. Our students could not do this without the continued financial support and mentoring of our generous sponsors,” Woo said. “Our student teams, their coaches and I really appreciate all their dedicated help.”

The Heavy-Civil and Mechanical teams did not place; they were supported by McGuire & Hester and Dome Construction, respectively. 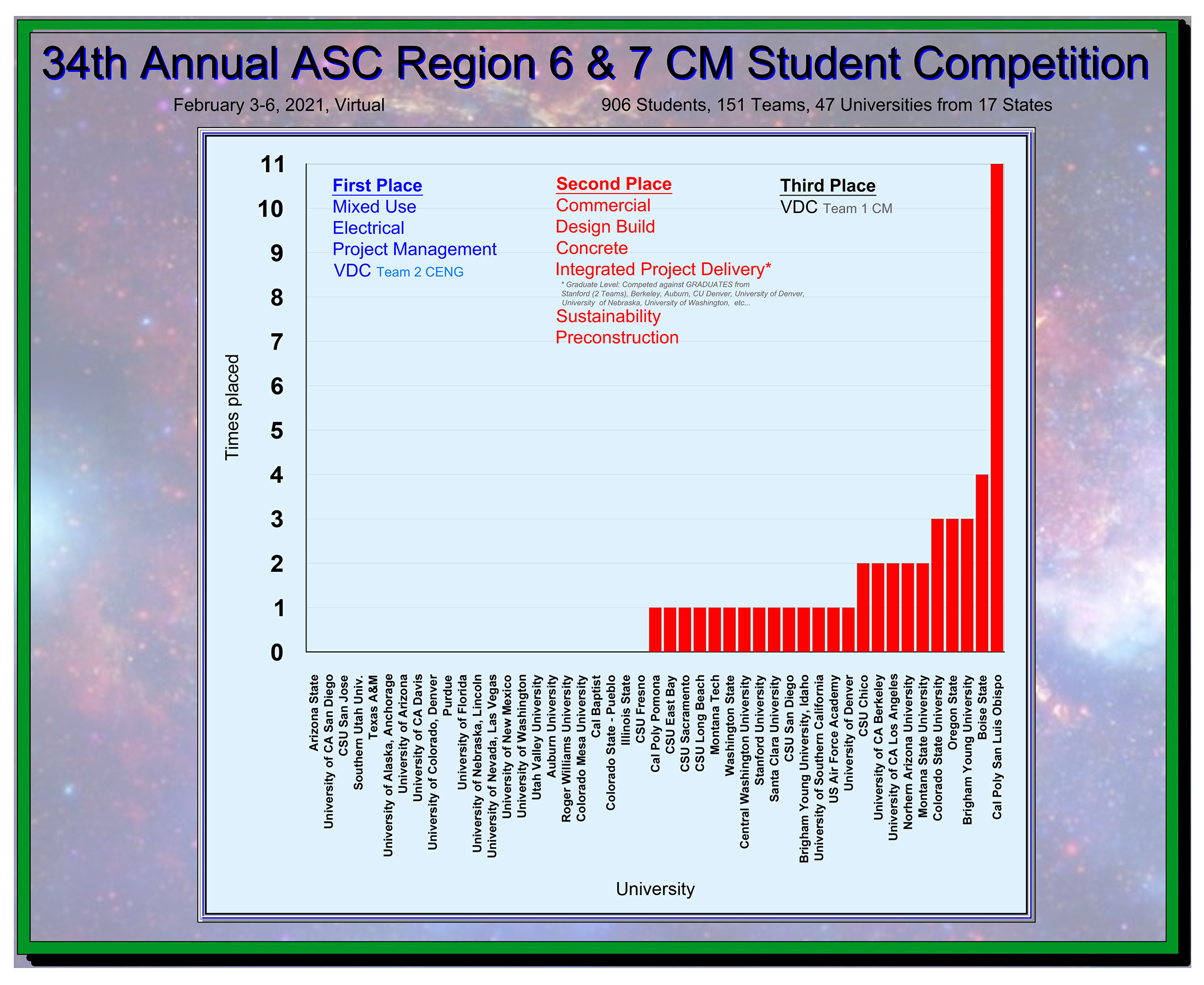 The Construction Management Department, now in its 51st year, is one of the most respected programs of its type in the country. With more than 500 full-time students, it prepares graduates to lead project teams of other professionals in the completion of complex infrastructure projects. These graduates are actively recruited by more than 200 firms spanning the globe. For more information, go to www.construction.calpoly.edu.

The modern, design-centered laboratories and hands-on curriculum in the program allows students to experience real-world conditions and learn how to incorporate the appropriate engineering standards. The program, ranked first in California and second in the nation by the U.S. News & World Report, focuses on teamwork, communication, problem-solving and state-of-the-practice analysis and design techniques. It prepares students to effectively communicate with other engineers, architects, planners, administrators, government officials and the general public. Read more at www.ceenve.calpoly.edu

Photo information: Cal Poly’s winning Commercial Team members get together via Zoom after the ASC Competition that was virtual this year for the first time. The team members (from the top left to right) are Evan Tookey, Shaina Suanico and Lizette Galvez. On the bottom (left to right) are Sophie Stewart, Skylar Schrank and Josh De Mattei.