Home : Landscape Architecture Students Team Up to Beautify Cal Poly One Utility Box at a Time 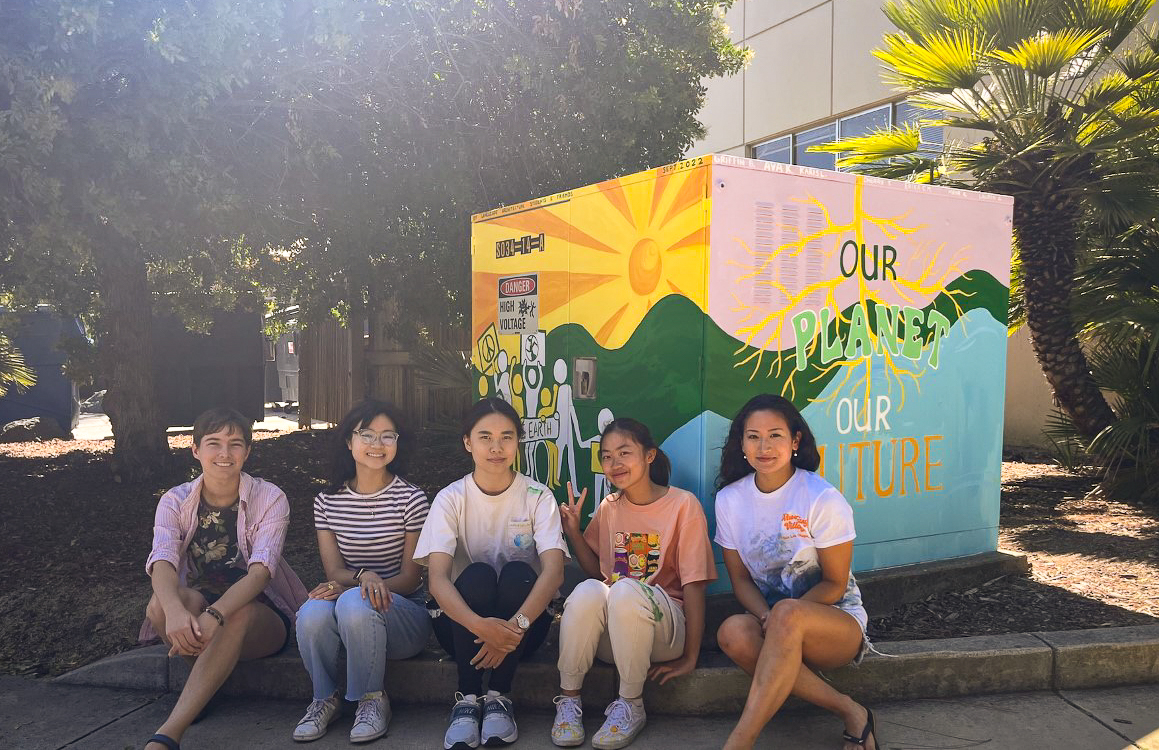 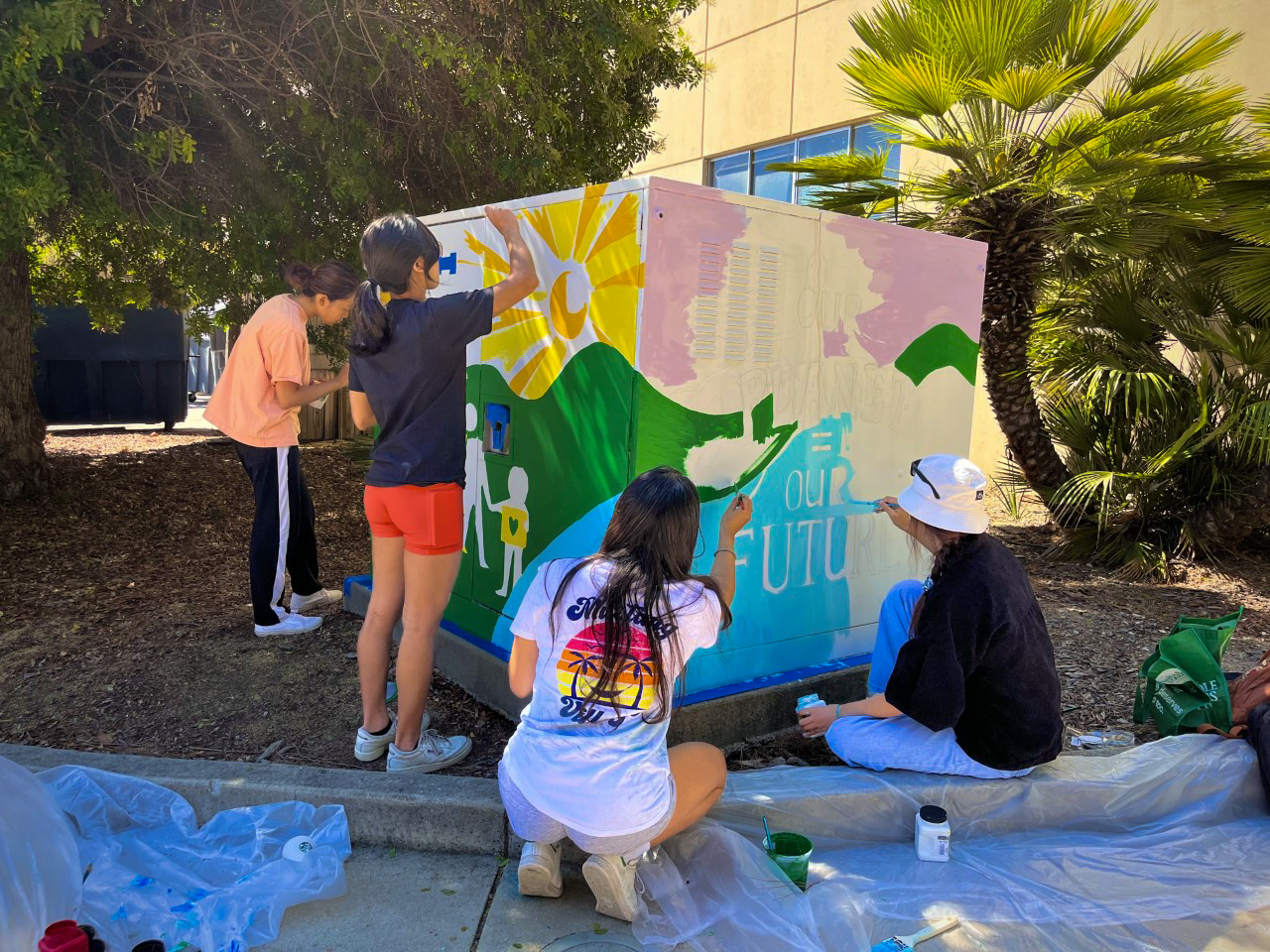 The utility boxes around campus have a colorful new look thanks to a group of motivated Cal Poly students and a campus beautification initiative.

Just before the beginning of the fall quarter, four members of the Student Chapter American Society of Landscape Architects completed their utility box art project in which they designed and painted a campus utility box to illustrate Cal Poly’s core values.

The SCASLA, the group responsible for the utility box between Dexter building and Kennedy Library, developed their design to highlight the importance of sustainability and global environmental action. The utility box art features a group of environmental demonstrators, California poppies, San Luis Obispo’s green hills, wind turbines and an “Our Planet Our Future” message in large lettering. 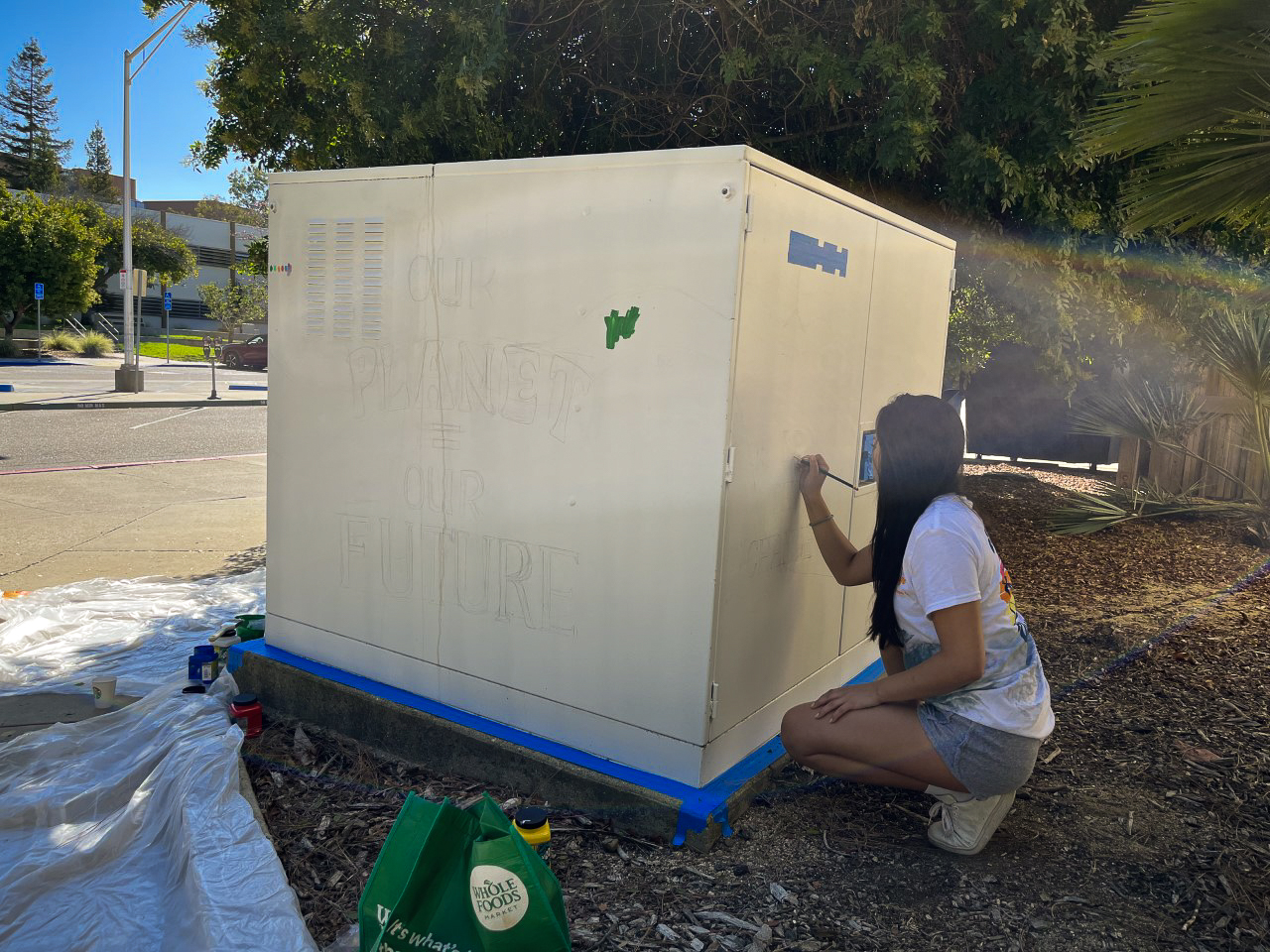 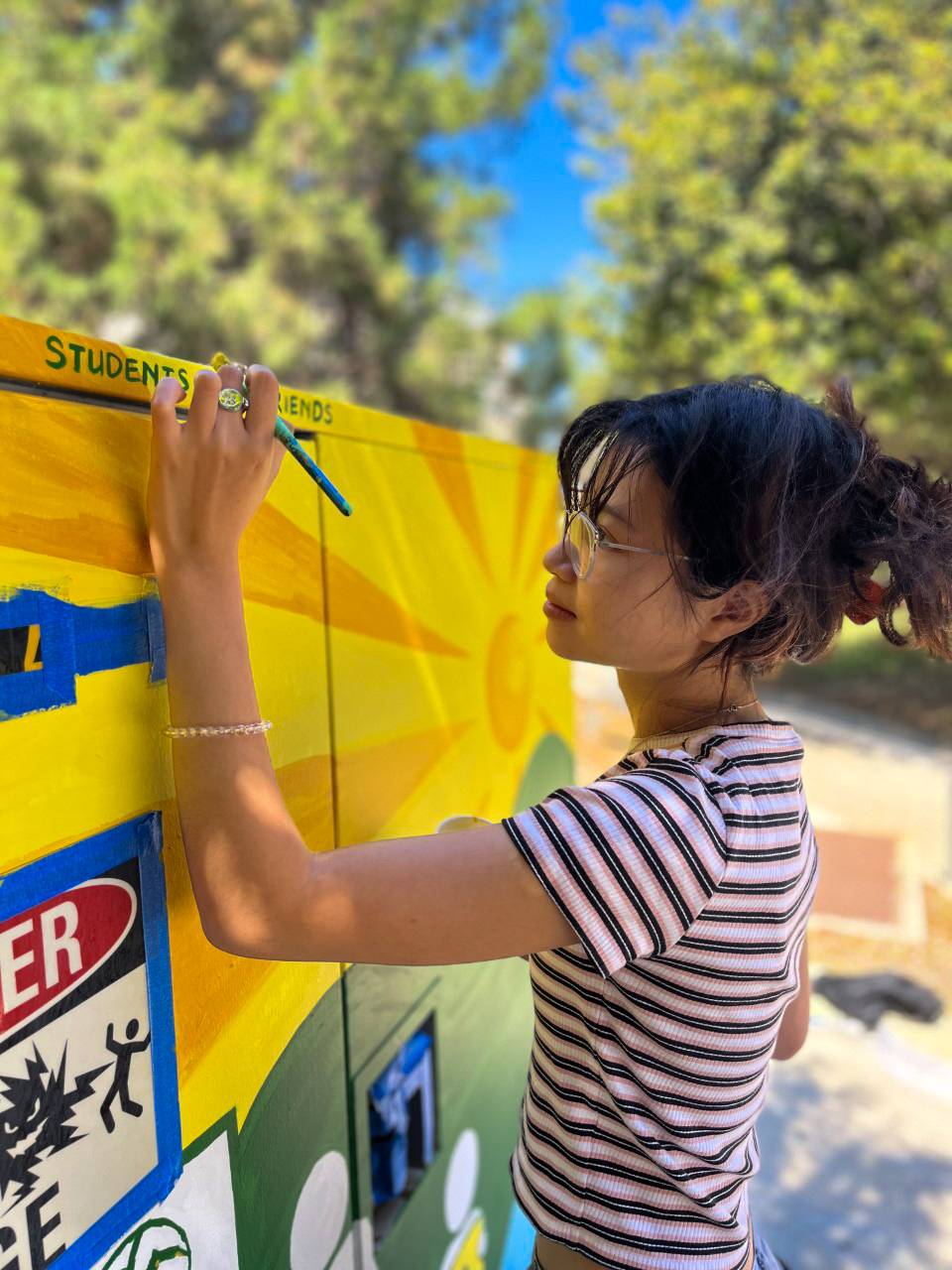 The team started planning in the spring quarter of 2022 and spent the summer measuring the box’s dimensions, refining the design, getting approval, gathering the materials and painting the box. Murase mentions how speedy the painting process was even after a long period of preparation, giving credit to everyone involved who offered to help.

“And people brought their friends,” Murase notes, “[...] we had those extra hands to help. It was really fast. But it was a really enjoyable process because we had a great team of people.”

The team hopes that Cal Poly community members will recognize the box’s call to action on climate change and become inspired by the art to get involved.

“More than ever now, people need to take action and really educate themselves on the effects of climate change and what we can do to help ameliorate the situation,” Tsang said. 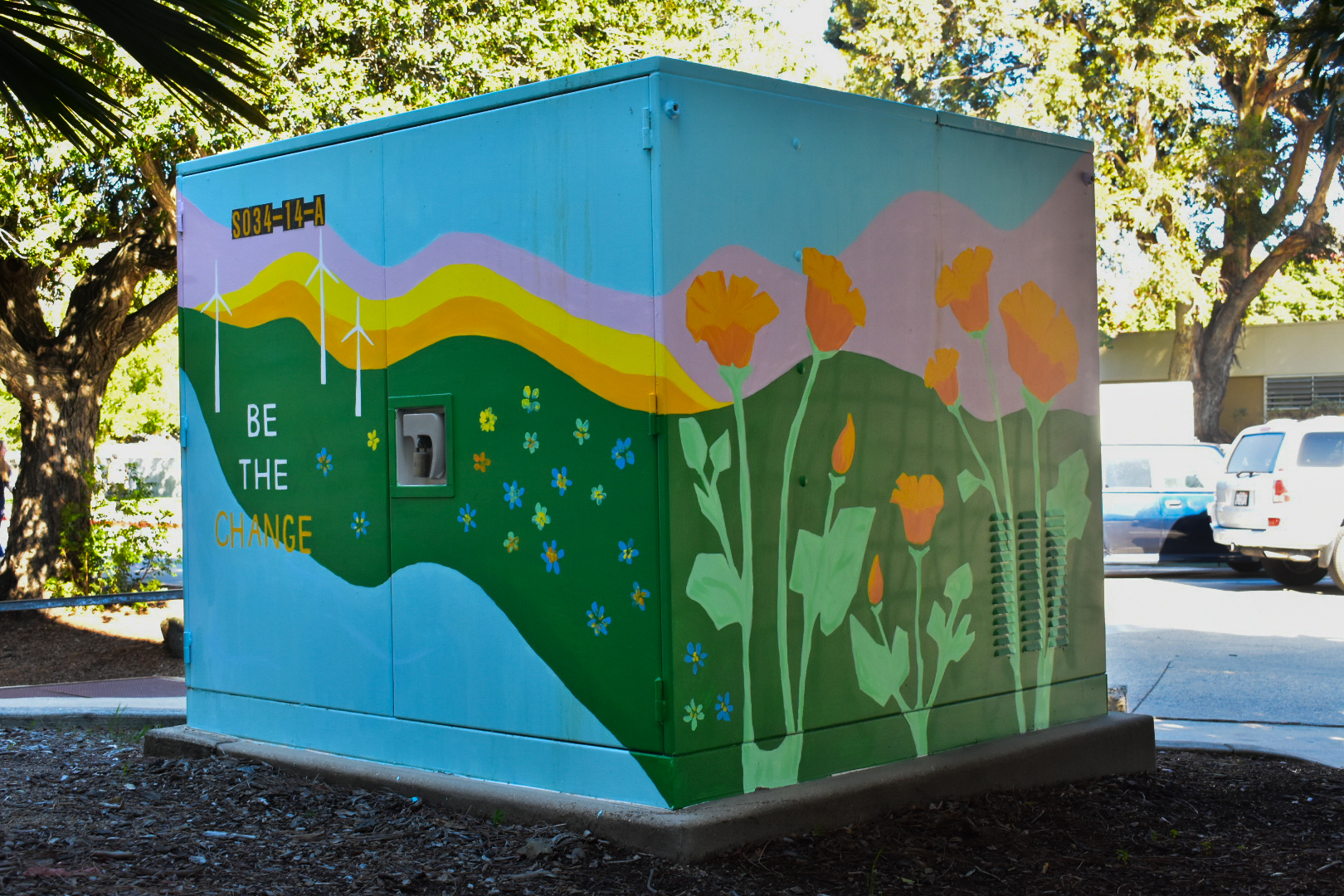 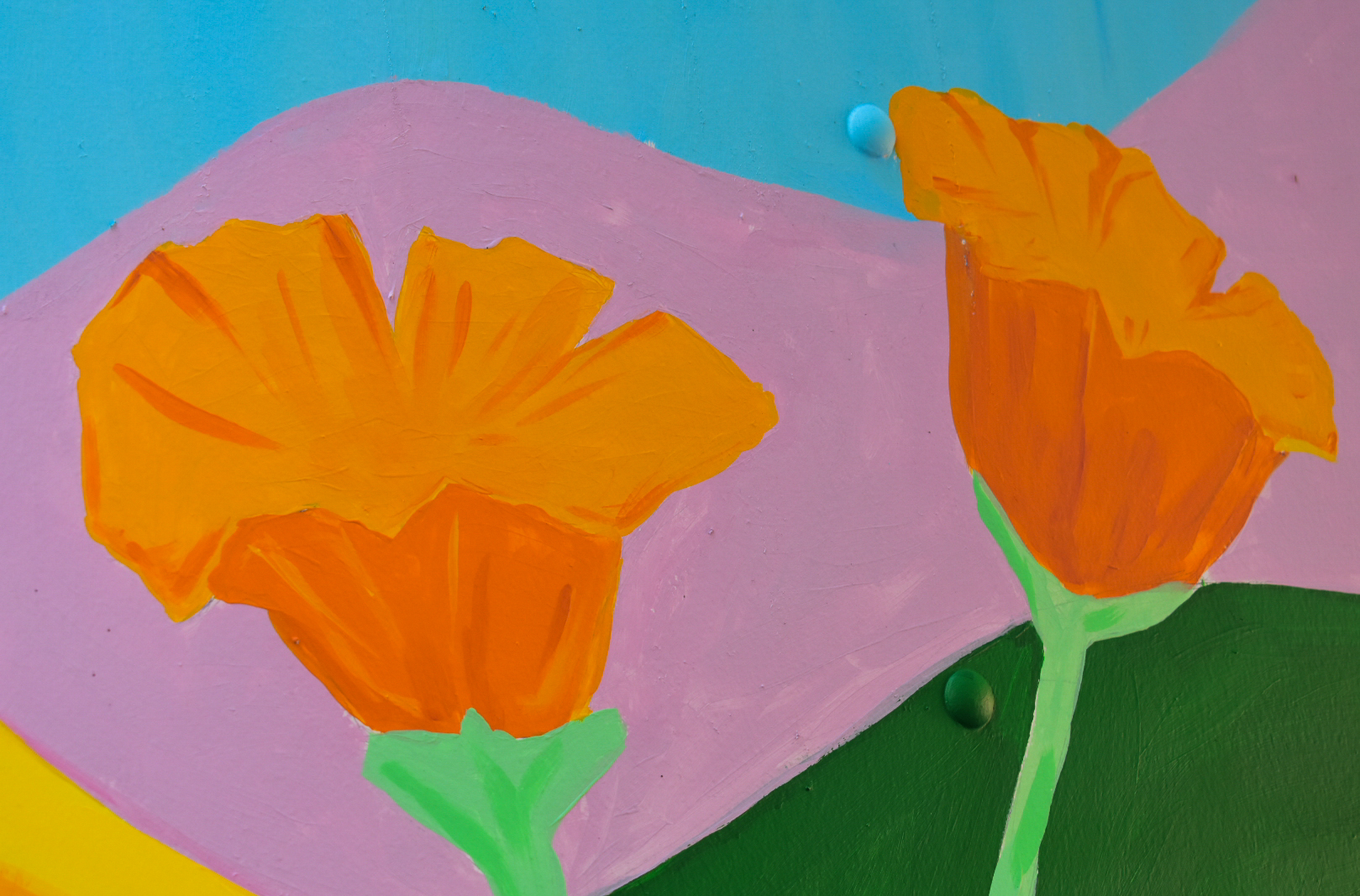 1. The back facing view of the utility box 2. A detailed shot of orange California poppies on the box's Dexter-facing side. The team wanted to feature the poppies to emphasize California’s place in the fight against climate change 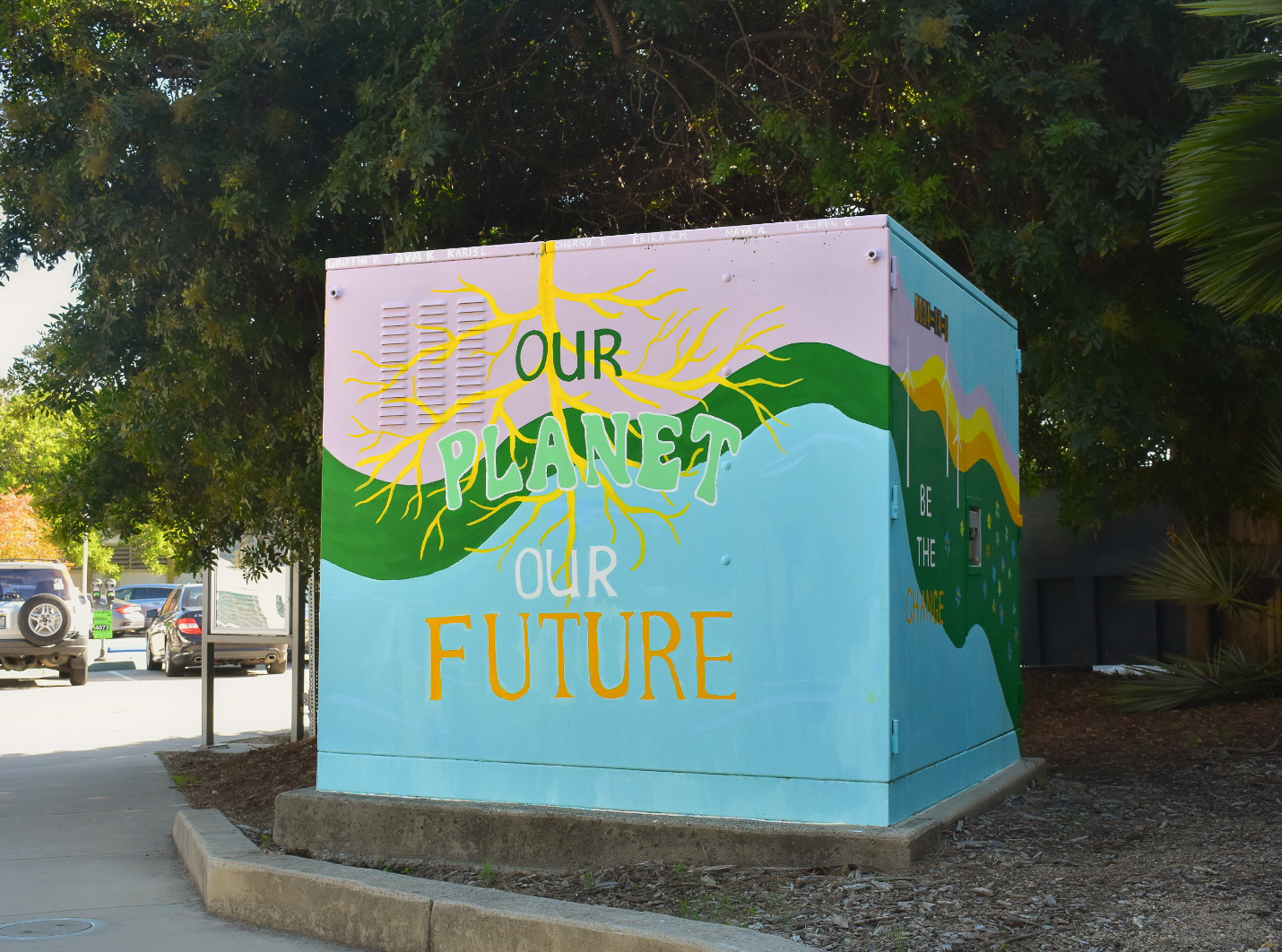 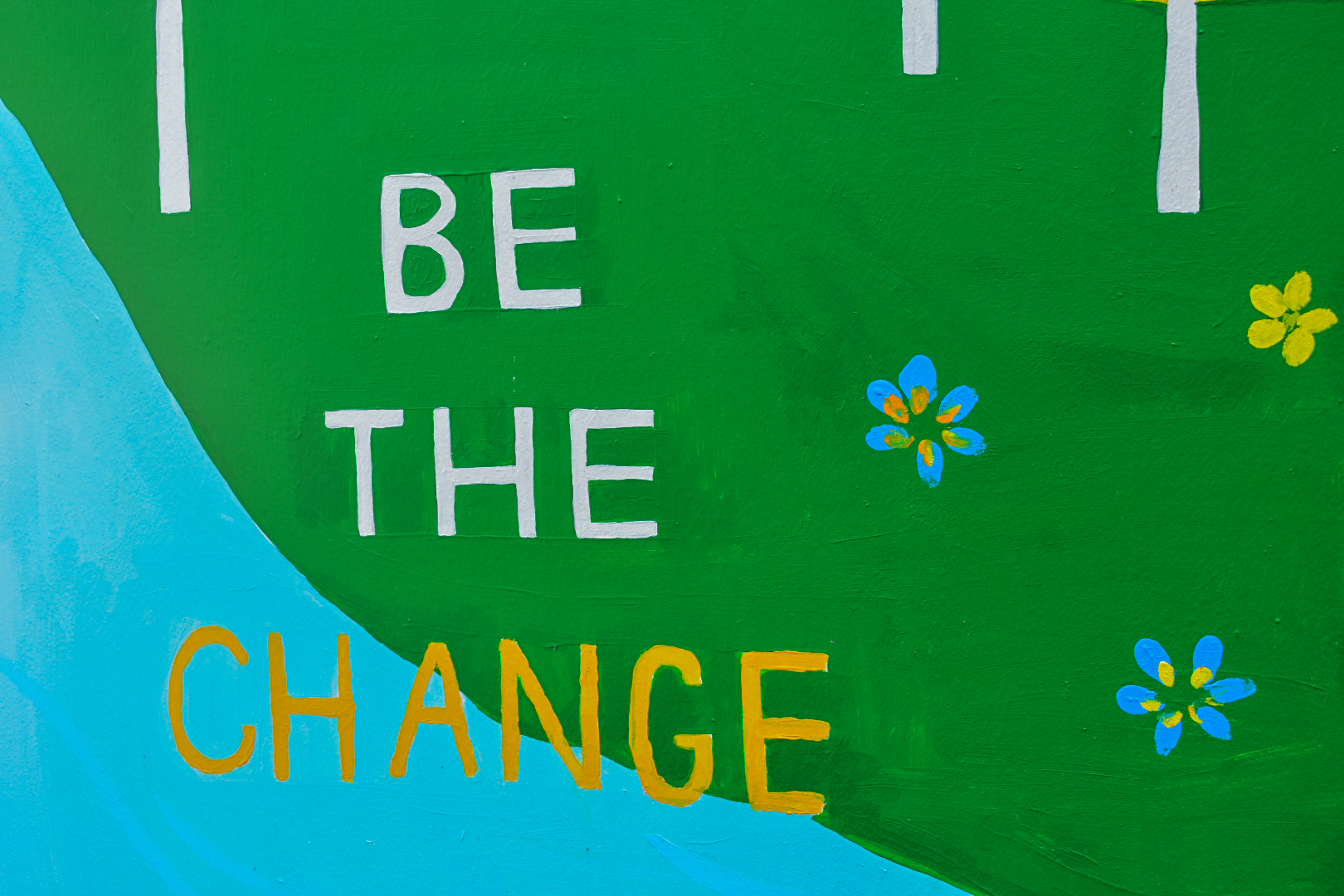 1. “Our Planet Our Future” written in big, bright letters facing the Kennedy Library walkway 2. A closer look at the “Be the Change” banner surrounded by rolling green hills and small flowers

The SCASLA’s utility box will not be the only one coated in color as the project is part of the Utility Box Art Project put on by the Campus Beautification Initiative. Its purpose is to engage students, faculty and community members in beautifying the campus and showcasing the school’s core values through collaborative art and design.

This opportunity, funded by Cal Poly Facilities and Management, allows participants to “introduce themes to campus, create a sense of place and identity, and inspire thought and conversation,” as stated on the project’s page.

Cal Poly students, faculty, and community members living in San Luis Obispo are invited to apply by Feb. 15. Facilities Management and Development and a selected art committee will review the applications at the start of 2023, with the chosen applicants expected to be announced in March 2023.

Murase expressed her excitement for the ongoing project as it will create more opportunities for student involvement.

“And hopefully, people were inspired by seeing ours and the others that were created and kind of were like, let’s do this.”