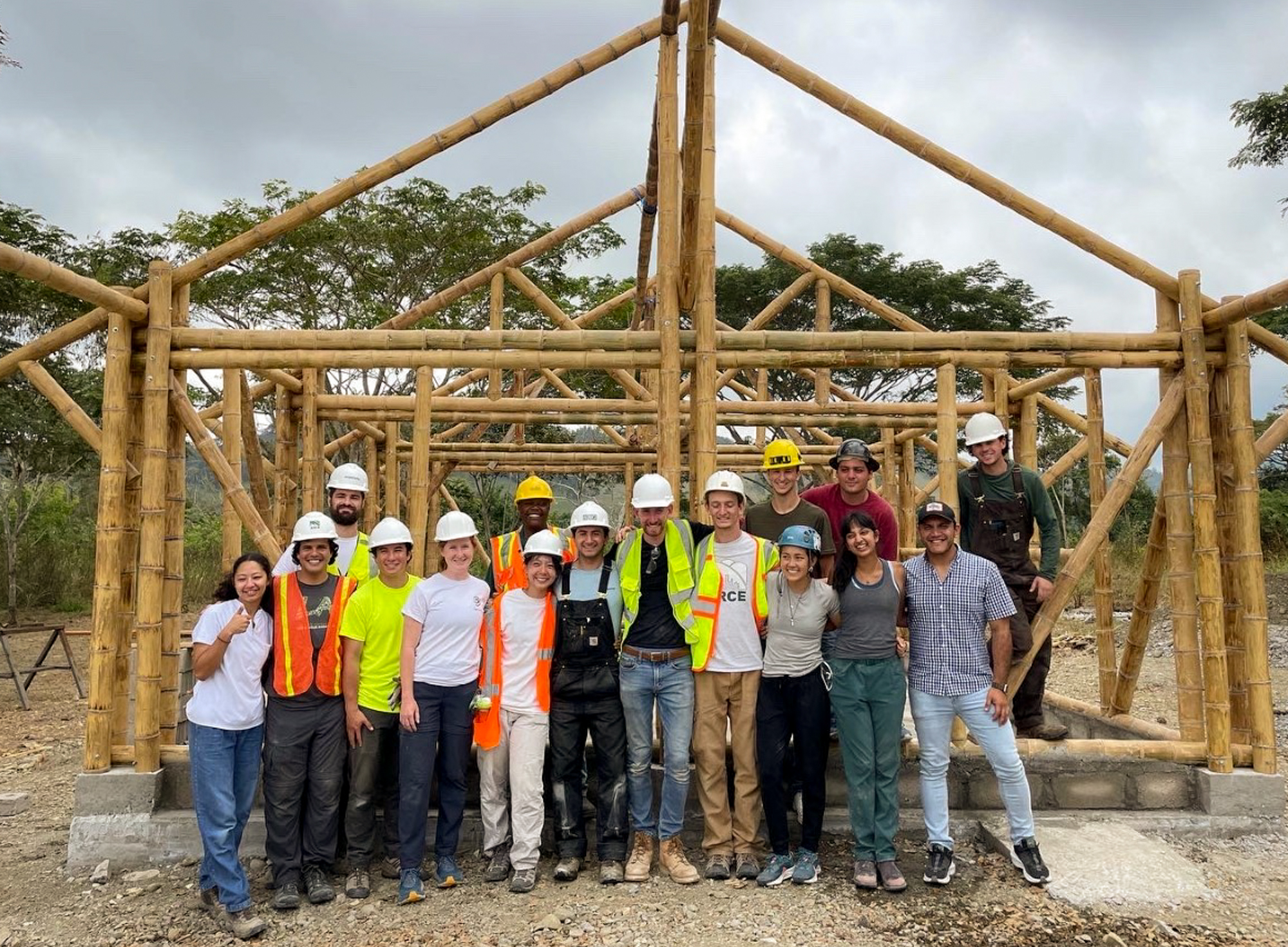 During the summer of 2022, a group of architectural engineering students and a faculty advisor went to the seismically active region of Pedernales, Ecuador. Partnered with Miyamoto Engineering, the Structural Engineering Students for Humanity (SESH) assisted the impacted community in designing and constructing bamboo structures.

For faculty advisor James Mwangi, the partnership between SESH and Miyamoto Relief — which began after the 2010 earthquake in Haiti that killed almost a quarter of a million people — was an opportunity to connect Cal Poly students to communities affected by natural disasters and provide structural engineering assistance. To have students visit these communities and see what happens when there are no building codes or building codes are never enforced.

“Its main purpose is to help rebuild disaster-stricken communities with a focus on economy, poverty and culture and understand how all these different values interact with structural engineering," Mwangi explained.

Impacted by an earthquake in 2016, the coastal town of Pedernales welcomed the SESH team for their two-week trip, splitting into different groups to tackle various tasks together.

“It wasn't just our team, but we were able to work together with leaders of the community, people that were experts in bamboo construction, and then also with architecture students from the area and with Miyamoto engineers," fifth-year architectural engineering major Nicholas Sowatzke said.

Unique to the area, bamboo was the primary resource students worked with. Working with bamboo presented a new hands-on learning opportunity involving treating and connecting the more flexible and seismic-resistant bamboo. However, despite the unfamiliarity with the material, students used their prior knowledge to form a comparative baseline.

“So, it's really cool to find that bamboo is actually kind of similar to things that I've learned in my timber classes," fourth-year architectural engineering major Hayle Jones said. "I know everything has very different material properties, but I was able to apply some of the things I learned in my timber classes to say, oh, I know why they're doing these practices."

True to Cal Poly's learning philosophy, students contributed to all aspects of the construction — selecting bamboo without cracks, avoiding cutting in knots to preserve its strength and not bolting too tight to prevent cracking. In the field, the SESH team had to operate with intention realizing that not all bamboo connections lined up because of the varied sizes in diameter and length.

"You could have pieces of lumber that are the same, but with bamboo, it's completely different. We had to measure, and then trial and error putting a connection together," Jones revealed. "That was our Learn by Doing, we were there not just watching everyone doing it, but we were the people building.”

As is typical for a SESH trip, the second week was about cultural immersion, where students stay with the communities and participate in daily activities, such as spending time in the town, trying new foods and learning the language. Students get the chance to connect with the diversity of engineering and the communities they have worked alongside.

"I truly loved practicing my Spanish and getting immersed in the culture. And I actually still text some of the people on-site to this day, and they're just really wholesome, beautiful people," Jones said fondly.

After being in Pedernales, students traveled to neighboring cities and had the opportunity to hike a volcano.

"My favorite overall was being able to go up to Cotopaxi, a volcano near Quito, the capital of Ecuador," Sowatzke said enthusiastically. "We were able to hike that as a group, and it was absolutely beautiful."

As of 2022, SESH has taken four trips to Haiti, three to Nepal, one to Myanmar and one to Ecuador. "So as long as our partners, Miyamoto Relief, are totally happy with what we do," Mwangi said, "and I know that they are, these trips will continue."

Where Miyamoto Relief believes the SESH team's services will be most needed is where they will go next.

"I never really thought much about how structural engineering impacts people in different communities and how depending on where you are in the world and what resources are available, you can use structural engineering to provide a positive impact to people," Sowatzke said, reflecting on his experience. "I think that was a big takeaway for me."

The College of Architecture and Environmental Design and Structural Engineering Students for Humanity would like to thank Miyamoto Relief and the following donors:

If you are interested in sponsoring SESH, please consider donating by clicking here.