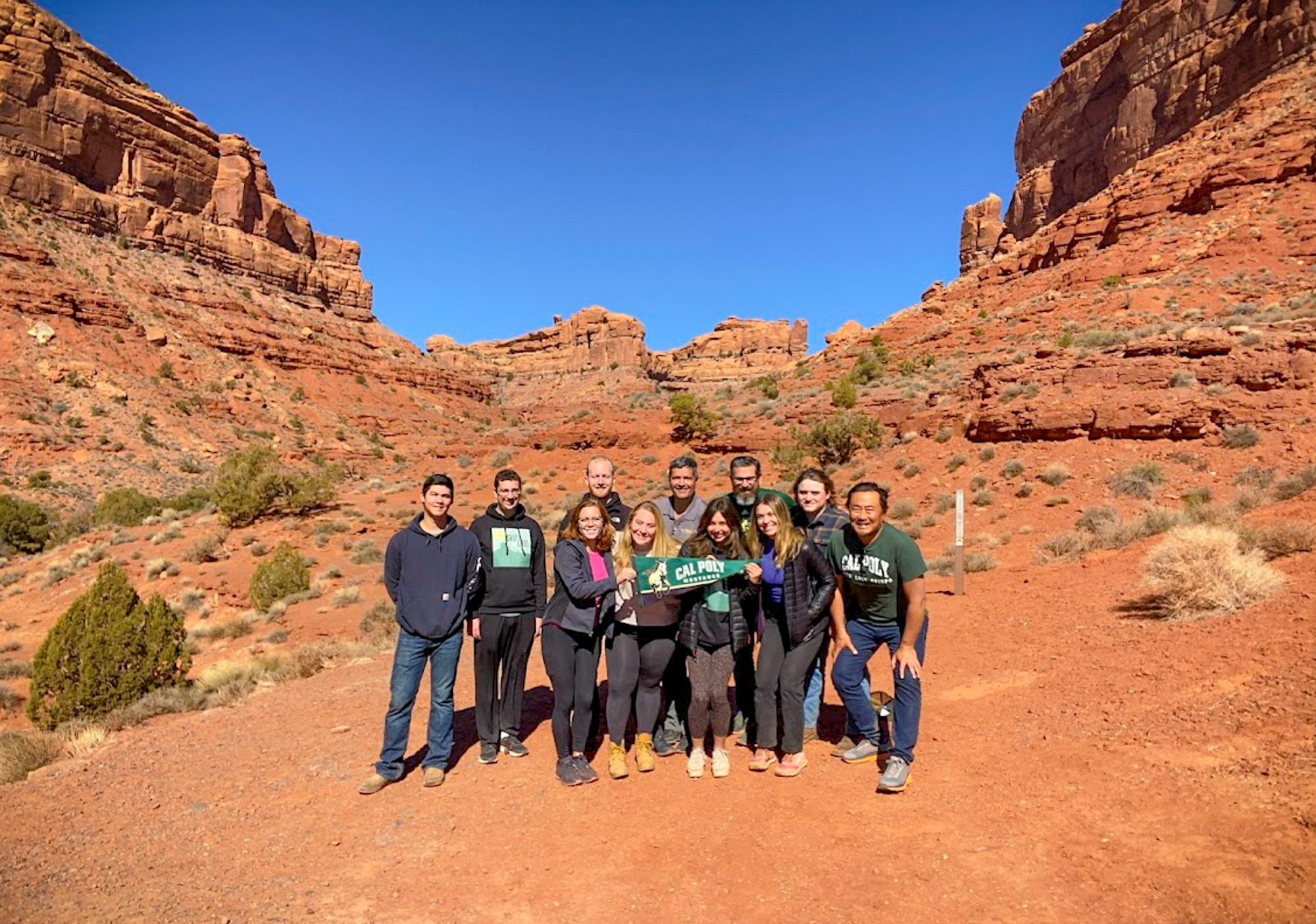 Over Cal Poly’s spring break in 2022, a group of dedicated students and faculty traveled to the Navajo Nation in northeastern Arizona for a week of collaboration with the Diné people. During that time, the 11-member team installed solar collectors to primarily power refrigeration in family homes, built culture-bridging relationships with the resilient community and gained real-world, Learn by Doing experiences.

That week of work in late March was supported by months of preparation, during which the diverse group of students analyzed energy demand and designed solar-powered refrigeration. They also researched potential government support to scale the future impact and helped raise awareness of the inequalities that the Diné people face. They demonstrated their initiative by overcoming obstacles they faced in transporting materials from various donors.

What did your day-to-day duties entail regarding planning and installation?

Sydney Sitton: My work on the project started in January. I was connecting with our industry sponsors and students and ensuring that we were coming along on the procurement of materials, developing a schedule and figuring out the safety aspects and the logistics of implementation.

We began the installations near Red Mesa, Arizona, on March 22, and I was on the team that worked inside the homes. When we deployed a group at each house, a group would go on top of the roof to figure out the installation, and then one other person and myself would go inside the house, meet the family and figure out where the best place logistically would be to install the units inside the home. From there, we would make a point of connection between the outside and inside.

Janelle Cruz: The first day, all 11 of us worked together on a house. After that, we worked in two groups on different homes. Each group had its reservation guide, who served as our liaison within the community. We would talk to the homeowners, find out what areas to avoid and ask them questions about anything we had to know before we started putting things down.

How was the group dynamic with a sizeable cross-discipline group working on the project?

Sitton: There was a spark among the team members. Everyone had a collective interest in not only finding a way to help the Diné people in the Navajo Nation, but they had a vested interest in solar technology as well. I think that just made us click even more.

Roles on the team came together intuitively, and we worked really well together. Everybody was able to align under what they did best and work together to ensure that we got all sides of the installation done.

What was the makeup of the team?

What was the role of corporate partnerships and sponsorships in assisting the project’s operations?

Sitton: We couldn’t travel to the job site beforehand, so much of our information was based on what our industry partners had told us. Specifically, Heart of America was monumental in ensuring that we had a good idea of the locations, and we worked under them once we got there. We became close with them, and they were a little bit shocked to see how passionate and well-informed we were on the project. Our other partners, including Goal Zero, were able to see that we were a group of students that really cared about the technical side of this project, and so we were able to address some engineering challenges.

It was great to work with these partners because they were really excited about us, and we were able to share our Learn by Doing values with them as well.

On the interpersonal side of things, how did the relationships with community members in the Navajo Nation progress from start to finish?

Sitton: Well, we knew it would be a challenge from the start. Having some random person come into your home and start moving things around can be an uncomfortable experience. But ultimately, I think they were really welcoming to us.

As much as the installation was the main goal of this project, it was also to establish relationships. We were able to show the community members that we were there to make a difference in their lives and provide access to electricity.

We also learned a lot more about their values as a community: taking it slow and valuing beauty and balance in your life.

Cruz: Some things definitely were lost in communication. There was also an initial hesitance and distrust, which is entirely understandable, given the history of people “helping out” the Navajo Nation but making things worse. There’s just a really bad history of those experiences.

Generally, once people talked to us and saw what we were doing — delivering a working product — they were much more trusting. Most of the people and those in the community were really excited about us coming back. So, it was a really good experience for those involved.

Did this immersive experience help you reevaluate concepts you have considered?

Cruz: As someone who wants to build a product for people who need it, I learned not to make assumptions. There is value in asking clients questions about what their needs are. That was enlightening. I got to actually ask them questions and found out how they are going to use this. Do they even need this? I think that’s really beneficial, having more connection with the customer before initiating the build.

What’s next for the relationship between Cal Poly and the Navajo Nation?

Sitton: We have planned to provide community members with operations manuals on how to take care of their equipment in the next couple of months. We will also be doing check-ins to see how the equipment is functioning. There will be many lessons learned, but ultimately, we are excited to continue the relationship with the Navajo Nation. I know that Goal Zero, Dometic, SOLV Energy, and Heart of America will continue that relationship. We want to support that, not only by having students do the installation but by having them involved in the technical development.

The generous donors who made this trip possible contributed funds, equipment, guidance and mentorship throughout the project. The College of Architecture and Environmental Design and the Construction Management Department would like to thank the following groups for their support, as well as several individual donors:

A return to the Navajo Nation is in the planning stages but still needs support. Please consider donating to the Learn by Doing Student Entrepreneurship General Fund at the Give Now button below!