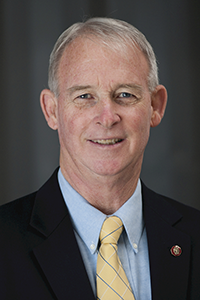 Douglas Lowe, FAIA, graduated with a Bachelor of Science in architecture in 1974. He is the founding principal and vice president of Cuningham Group Architecture, Inc. and was president of Cuningham Group Construction Services, LLC. Lowe is licensed to practice architecture in several states and as a general contractor in California. His skills can be seen in a variety of projects, including theme parks, hotels and multi-use facilities such as Disney’s California Adventure, the Star Trek Theater, Universal Studios Hollywood and the renovations of the Hollywood Roosevelt Hotel and Pasadena Hilton Hotel. He was elevated to Fellow of the American Institute of Architects in 2009 and in 2014 was the first recipient of the Norma Sklarek Award given by the American Institute of Architects, California Council for his humanitarian efforts, volunteering his assistance to communities recovering from disaster. Lowe served on the Dean’s Leadership Council from 1999 to 2006 and is a member of the industry advisory council for Cal Poly’s Resilient Communities Research Institute. He is a supporter of the Architecture Summer Career Workshop, sponsoring students with financial need, and works to help students secure internship opportunities.