Success and the City 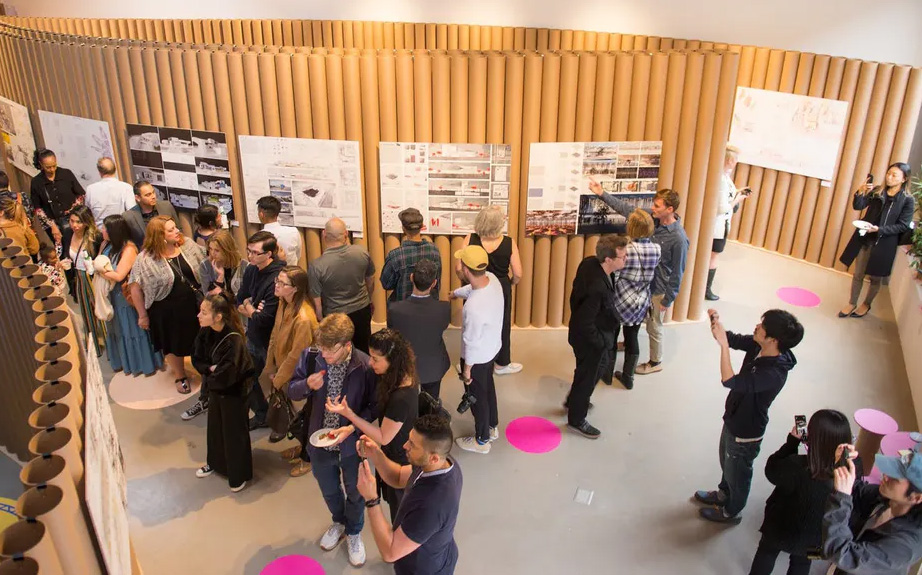 A relative newcomer to the scene, Cal Poly’s upstart off-campus studio — the Los Angeles Metropolitan Program in Architecture and Urban Design (CPLA Metro) — has found its niche and is hitting its stride. The program, as recently reported in the online forum Archinect, has established itself as a leading architecture and urban design program that “punches far above its weight.” Reported in the online forum Archinect.

“I believe it is important to have a voice in the community you participate in,” Stephen Phillips, the founder and director of the nationally-recognized award-winning program, told Archinect. “It is important to work together with other motivated thinkers, designers and practitioners to move the conversations within our profession.”

Recently elevated to the American Institute of Architects (AIA) College of Fellows, Phillips hopes the program will be admired for the quality of education that it affords to students.

“The students in the program are absolutely competitive in the profession and more and more in academia,” he told the publication, noting that the program costs only about 20% of the tuition of most private schools.

An off-campus program in the Architecture Department of the College of Architecture and Environmental Design, CPLA Metro is not subsidized with any state funding. However, it’s made an outsized mark in LA’s architectural and broader community circles.

A Formula for Success

The CPLA Metro interdisciplinary studio immerses more than 30 aspiring architects in a multicultural urban setting rich with learning, practicing and networking opportunities. Phillips has designed the program to engage local architects, alumni and the many institutions in Los Angeles to support the students’ education and future career goals. 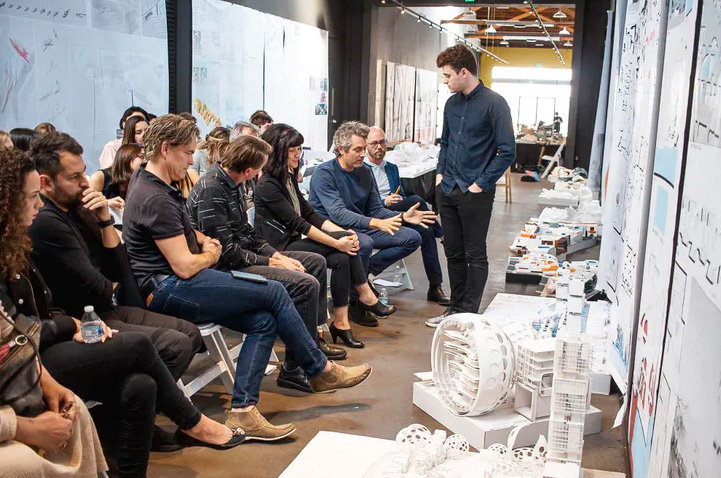 He works alongside four to six additional faculty, each selected to lend professional and academic expertise to the design and development of a comprehensive and integrated approach to building design.

“Through the LA Metro program, Stephen bridges academia and practice in the field of architecture, notably fostering critical dialogue between students and professionals,” an observation provided by Thom Mayne of Morphosis Architects in his sponsor letter to the AIA Fellow selection committee summarizing Phillips's career. Mayne works with CPLA Metro students and adds, “The program in particular instructs design, history, theory, criticism, and practice with unique synergy in order to advance academia and the professional endeavors of its alums.”

Visiting practitioners, scholars and community leaders serve as critics at the program’s midpoint and final reviews, and the teaching team meets frequently to mentor the students. Of the 20-week internship program, two thirds of the internships qualify for Architectural Experience Program credit.

In addition to time in the studio, students spend time earning educational credits in professional offices belonging to more than 25 top LA area firms and engaging in an architecture and urban design-focused public event series that brings students and the local community together.

Since the lecture series transitioned to an online format due to the pandemic, there have been unexpected benefits. Phillips has been able to reach out to distant professionals and extend a wider invitation to all CAED alumni to join in from wherever they are — not just those living in Southern California.

A Fellow is Recognized

Under Phillips’s leadership, the CPLA Metro Program has produced original award-winning research published and presented internationally. It has notably evolved design education away from prescriptive teaching methods typically performed under one studio design instructor toward creative and more inclusive team-facilitated studio environments where multiple faculty members working together lend their varied expertise — similar to how a real-life firm works.

Over the years Phillips has directly placed hundreds of students within distinguished firms and mentored their continued success in academia and the profession.

“Stephen has made innumerable connections for CPLA Metro students and has facilitated internships in many significant architecture offices due to their exceptional architecture abilities and critical thinking skills,” said Mayne. “I have been consistently impressed by the caliber and rigor of work that defines their time with us. Stephen clearly goes above and beyond to not only educate students, but also to create significant opportunities for them through fellowships, scholarships, and fundraising.”

His many achievements, including his efforts to develop the program on behalf of the students have not gone unnoticed. This year he was inducted into the AIA College of Fellows, the highest honor for members’ exceptional work and contributions to architecture and society. Only three percent of members have this distinction. Phillips’ recognition is in the category of architectural education, training and practice. 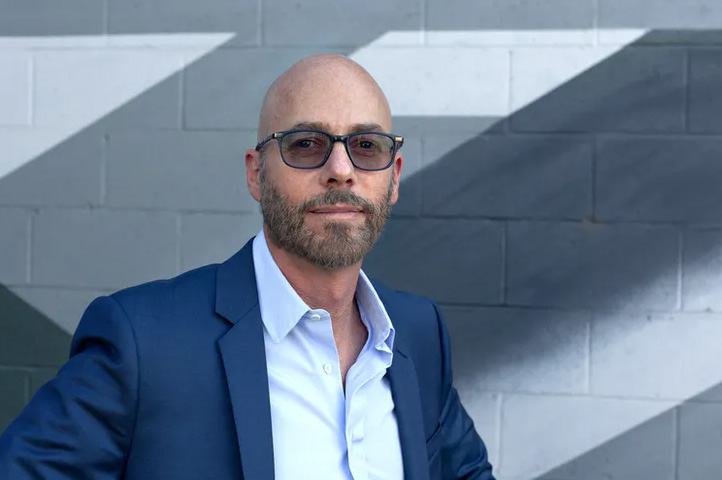 “I’ve always been interested in a multitude of aspects of our field and have committed my life to education,” he said when asked about his recent recognition, for which he was nominated by the Los Angeles chapter of the AIA. “Over the past ten years they have gotten to see the impact of our program on the architecture community here in Los Angeles most specifically. They see its value not only through our wide-reaching internship program for our students and the synthetic approach to design education in general but also the cornucopia of public events we host.”

Phillips earned his B.A. at Yale University; M.Arch. at University of Pennsylvania; and M.A. and Ph.D. at Princeton University. Before joining Cal Poly faculty in 2005, he taught or lectured at UC Berkeley, UCLA, SCI-Arc, and the California College of the Arts.

He has authored substantive original research and publications, including several collaborations with his students. One of these was “L.A. [Ten]: Interviews on Los Angeles Architecture: 1970s to 1990s,” which was completed as part of the Los Angeles Oral History Project, a collaboration with Cal Poly LA Metro and UCLA’s Oral History Department alongside the Getty Research Institute.

Since 2010, under Phillips’s leadership, CPLA Metro has become a major participant in architecture and urban design education in Los Angeles. In 2015 the Association of Collegiate Schools of Architecture (ACSA) bestowed it the Creative Achievement Award.

“The Cal Poly program is truly original; it brings multiple external voices into the institution and then midwifes internships between these figures and students,” said one juror in the ACSA review. “Students and faculty do not just quietly observe LA, rather they actively participate in LA.”

Link to more about the program’s Creative Achievement Award starting on page 31.

CPLA Metro’s fourth-year undergraduate studio recently received a 2020 Studio Prize from Architect Magazine for “Flatlanders: Multi-Income, Mixed-Use, Mid-Rise Housing for Downtown Los Angeles” — this despite the pressures of transitioning instruction during a pandemic. The jury selected six studios that encouraged students to think critically about the role of architecture and about how designers can better engage with the communities they serve.

For the students, the onset of COVID-19 canceled a studio field trip to New York, and their prominent event series, studios, classes and reviews all had to be moved online. The students, faculty and L.A.-area participants quickly transitioned to working in a virtual space. “People needed something that we could do together, to go online and engage intellectually as a group,” Phillips said.

Their winter/spring studio brief specified that the thirty-one students design a 12-story, mixed-use housing mid-rise with 50% porosity. It required students to develop spaces that leverage the links between forms, taking into consideration all the programmatic, spatial and circulatory implications.

“I’ve always taught that social politics matter, and that buildings matter, too,” Phillips said. “How do they correlate? We shouldn’t abandon architecture, but we should use it for strong social and political agendas.” 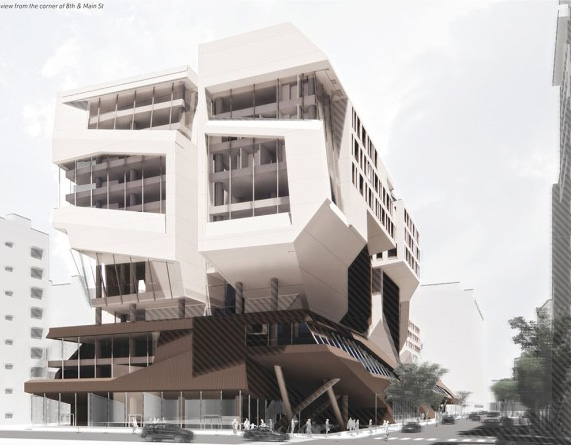 Studio Prize juror Victor Body-Lawson lauded the students and their brief for considering systemic issues of equity in access to housing as the projects were developed. He found the “Associate and Dissociate” scheme by Cal Poly student Curt Budd one of the most compelling of all the entries. “It represents architecture that continues to push form to create beautiful buildings,” Body-Lawson said.

Along with Budd, Liam Lautze and Violeta Smart were the primary CPLA Metro Studio Prize winners. Read more about the students’ and instructors’ 2020 Studio Prize.

The program earned additional accolades in 2020. A pair of CPLA Metro students, Nadthachai Kongkhajornkidsuk and Violeta Smart, received two of the top three awards in the AIA Los Angeles 2×8 Architectural Student Competition, which encouraged new approaches to the housing crisis. The competition, which showcased student projects from 16 schools across California, reimagined what a virtual exhibition of student work could achieve during a global pandemic, allowing for greater exposure of the work, and access to a national and international audience. Link to the full story about the 2x8 Exhibition. 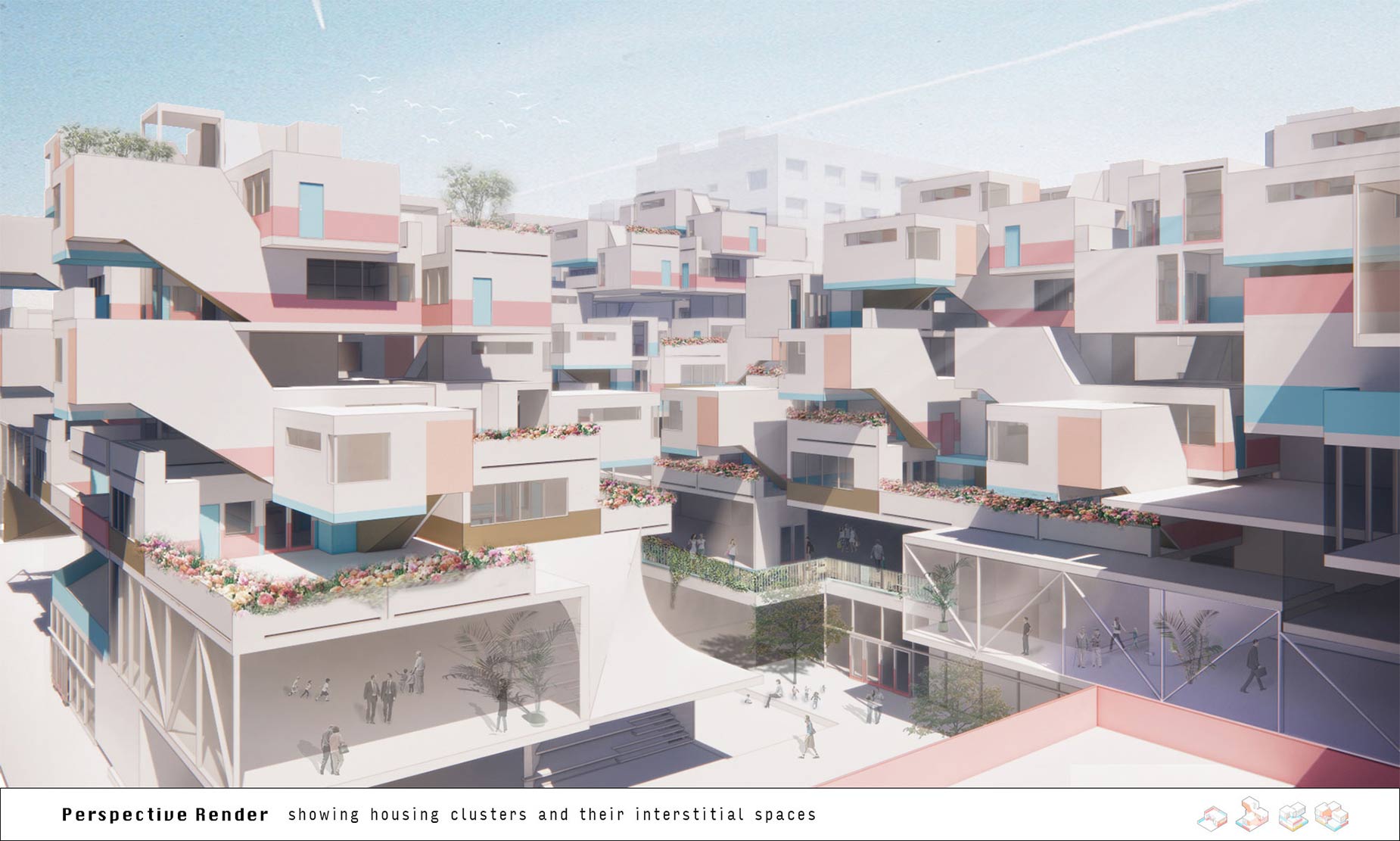 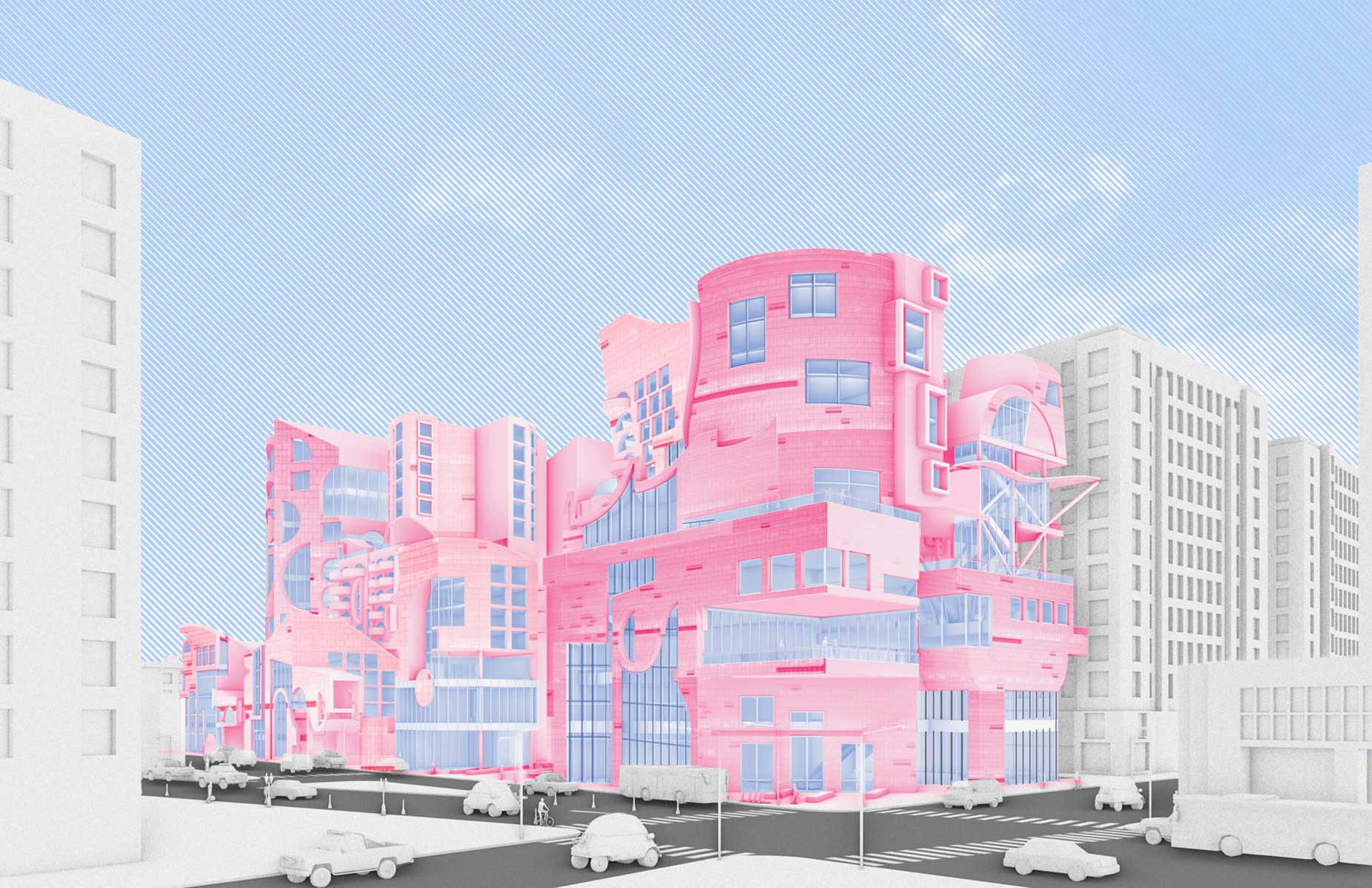 “Nadthachai’s project impressed jurors with a series of public and private spaces using modular units to break down the concept of a monolith and create unique aggregates that address an entire housing block,” said Phillips. “Violeta’s submission bore an insistence on making an architecture of ‘many’ and addressed segregation, injustice and inclusion.”

Philips is grateful for both those who paved the way for his success, as well as the success of the CPLA Metro program, including Cal Poly deans and chairs R. Thomas Jones, Christine Theodoropoulos, Henri T. de Hahn and Margot McDonald.

“I’ve also been honored to teach students here at Cal Poly whose design skills are spectacular – among the best the country has to offer; top graduate schools and firms more and more compete for our students. I’d like that to continue to be the norm.”