by Simeon Johnson and Alex Flores 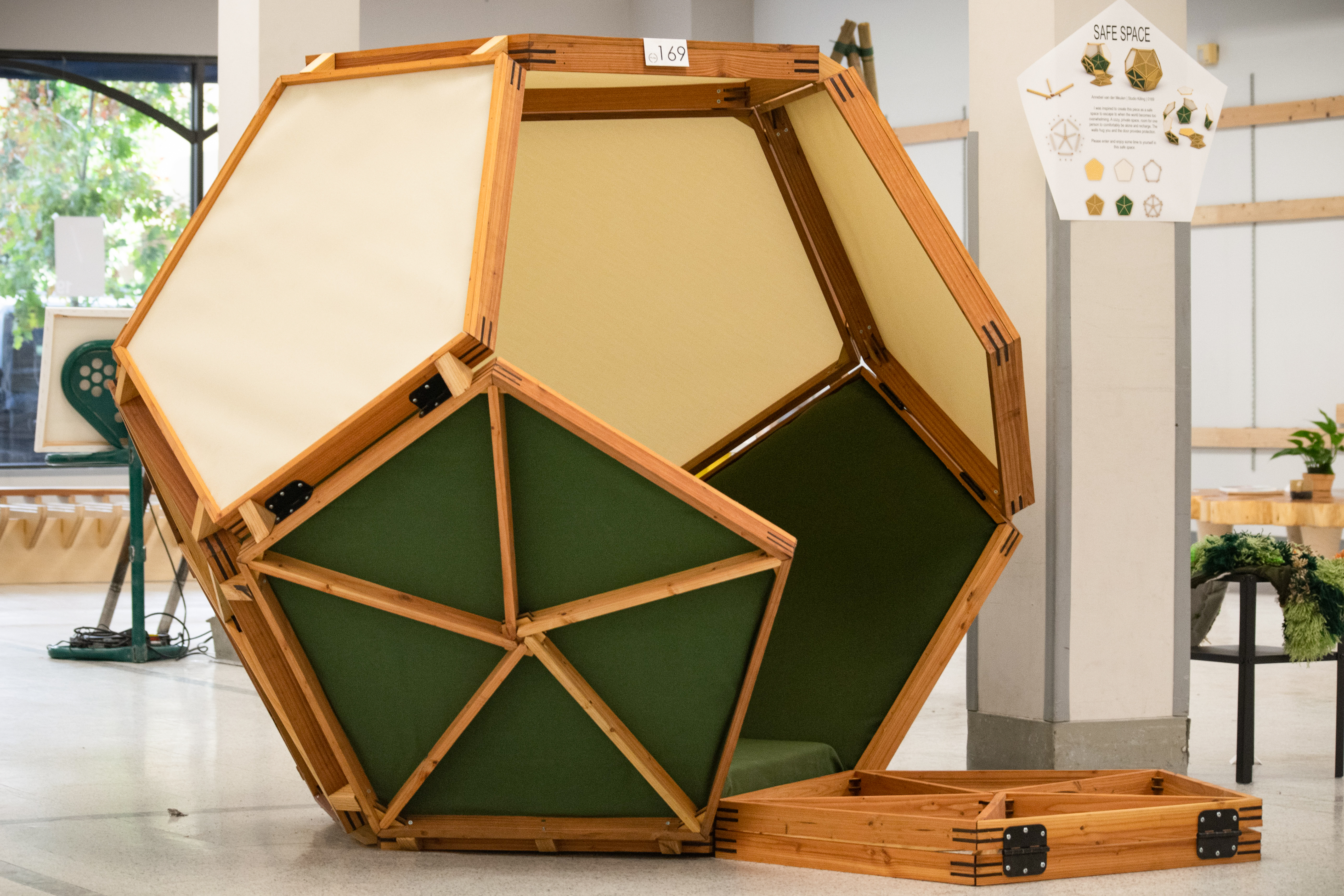 On Nov. 4 and 5, almost 200 students from Cal Poly’s College of Architecture and Environmental Design displayed their one-of-a-kind furniture pieces at the 19th Annual Vellum/CAED Furniture Competition and Exhibition. Hosted by the Cal Poly Architecture Department and Vellum Design-Build, the event is a chance for students from any of the CAED’s five majors to display their creativity and technical skills to a broad audience.

This year’s event in Downtown San Luis Obispo marked a strong comeback after the online and on-campus format of the past two years. With the second-largest turnout in the contest’s history, the event hosted hundreds of visitors.

True to Cal Poly’s curriculum in and outside of the classroom, Vellum is all about Learn by Doing. As students overcome challenges to actualize their vision, they learn what makes an ingenious design, often one where form follows function. 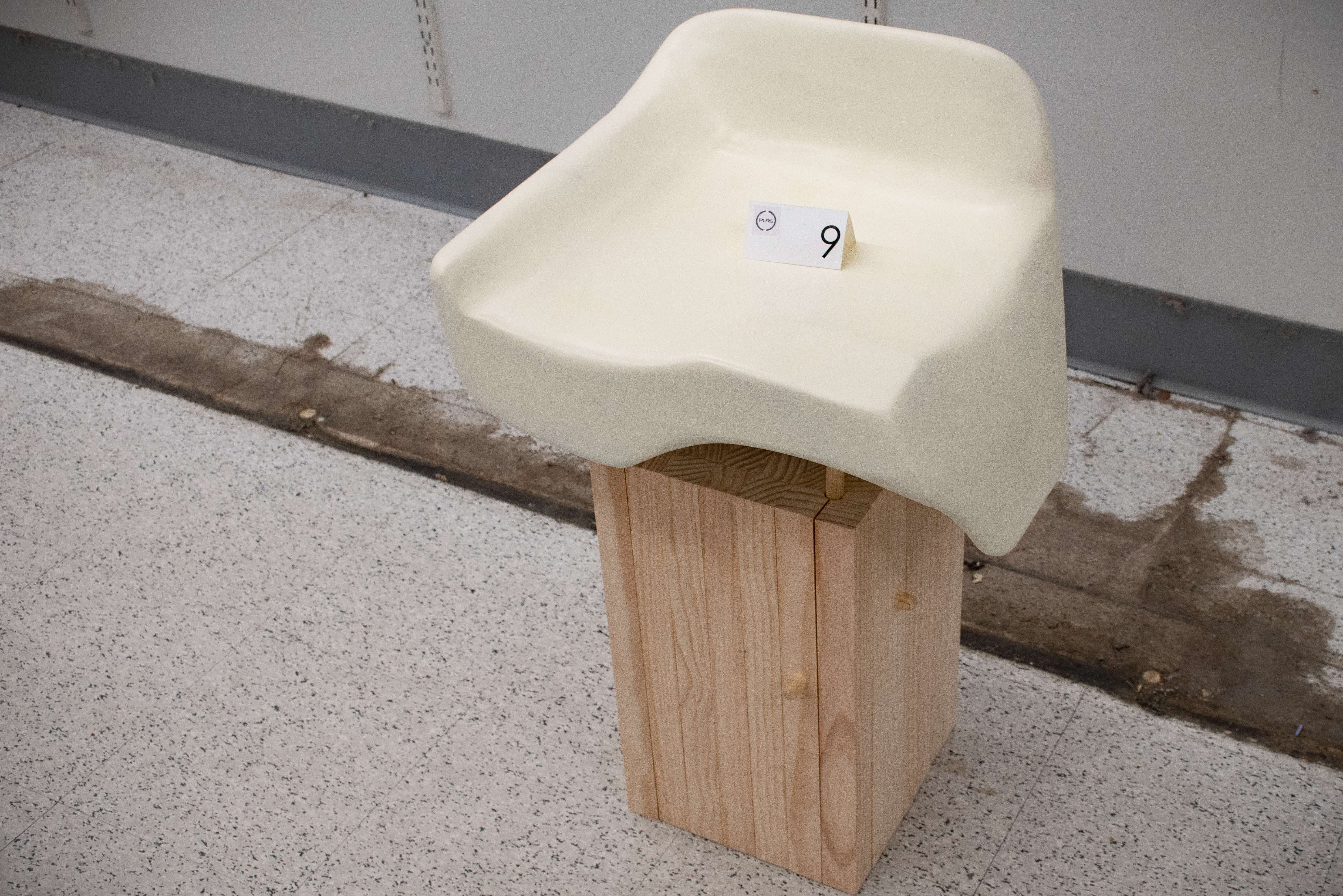 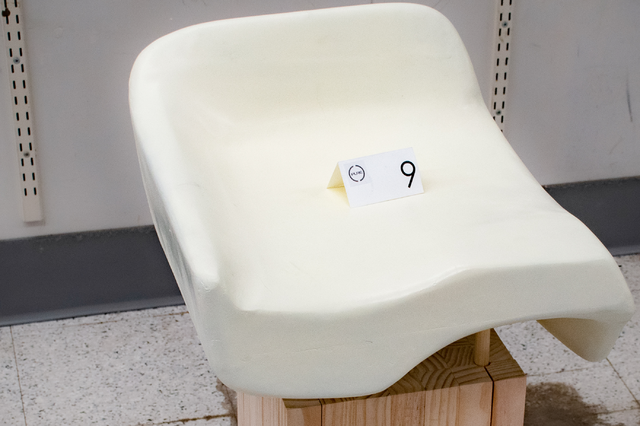 Ethan Odberg earned Space Architecture’s Milano Grand Prize — a sponsored trip to Italy and the chance to present at the Milan Furniture Fair — for his project “Rural Basin.” The modern seat encourages the audience to question their perspective on urban and rural zones.

“The sitting basin is propped above, made of polyurethane foam and resin; it is a futurist dream melted, droopy and objectified,” he said. “The base of untreated wood members is a form of neo-rural technology. It provides moments of engagement and alteration and grounds the artifact in utility.”

This year, the jury focused on student projects that pushed limits, exploring the more theoretical side of design and communication through built forms. Odberg’s jury-approved creation succeeded as an eye-catching and comfortable piece of furniture. 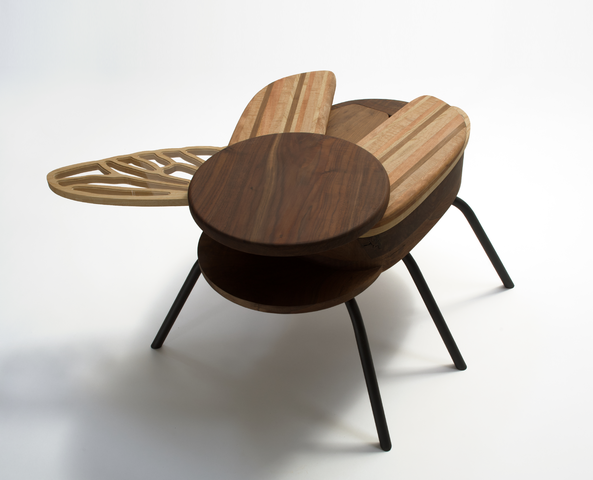 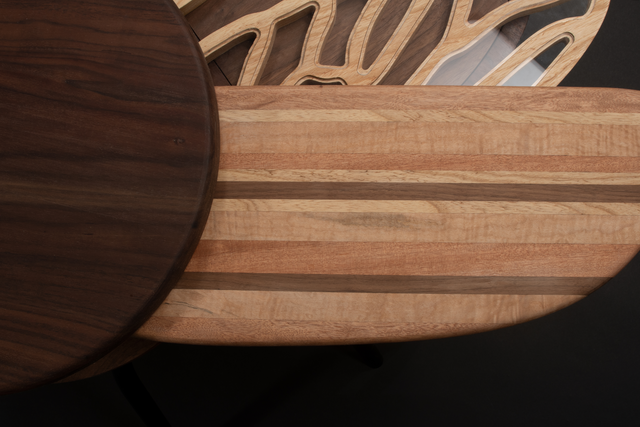 “I was inspired by the forms of insects, specifically beetles, and wanted to mimic the way in which their wings open and close,” she said. “This design allows for a table with an increasable surface area and an adjustable shape.”

Working with Deadwood Revival to source a slab of walnut — which would have been sent to the chipper otherwise — and using scrap wood and leftover metal from other student projects, she fabricated the piece herself with tools and resources available on campus.

“My primary goal with Swivel Beetle was to create a piece of furniture with sustainably sourced materials,” she said. “I was immediately pulled to wood as my primary building material. I am fascinated by the potential it has for being a carbon sink.”

Alekseyeva’s table not only fulfilled the C2C requirement through its design of reused material but also charmed guests and the jury with its unique design and artisanship. 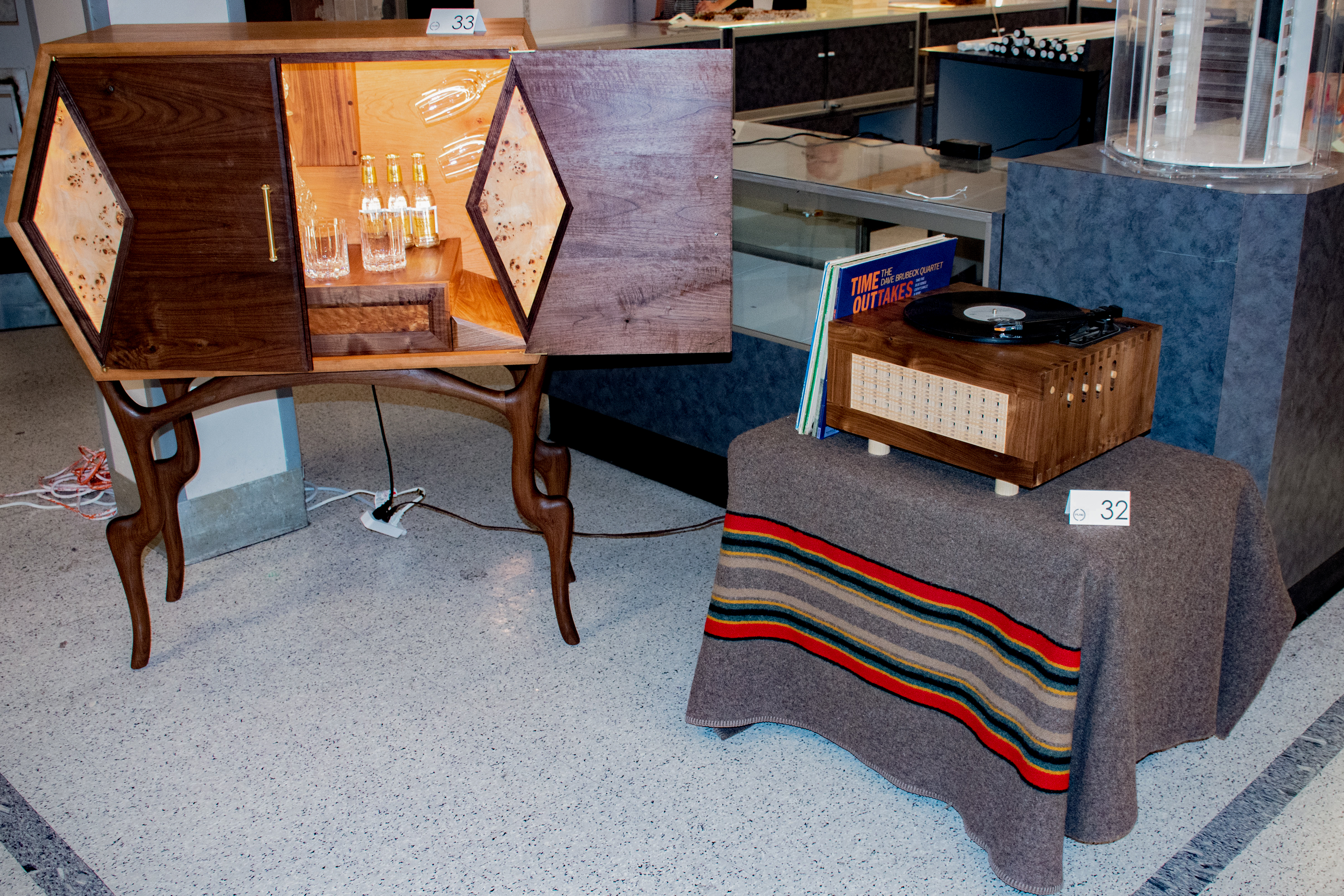 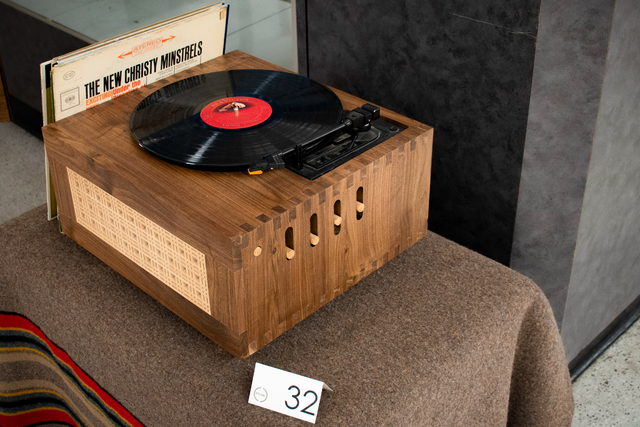 Another distinguished category was RRM’s 100% Pure award. Di Santo stated this award recognizes students who “could go from soup to nuts.”

“They could design it, craft different iterations, build physical study models to interesting shop drawings and renderings, and then be able to fabricate it with impeccable craftsmanship down to the level of minutia,” he explained.

Second-year architecture student Jack White took home the 100% Pure award for his skillfully built liquor cabinet and record player. White explained that while he explored some initial iterations digitally, he felt the design was too sterile and lacked the spark he searched for. For him, the design came to life in the shop as he experimented with different ideas. The translucent panels on the cabinet exemplified when White had to “blaze [his] own trail.” White stated that one of his motivations for pursuing the competition was his love for the craft and his hopes to make a career out of it. With three years left in the architecture program, White confirmed he would return to next year’s competition. 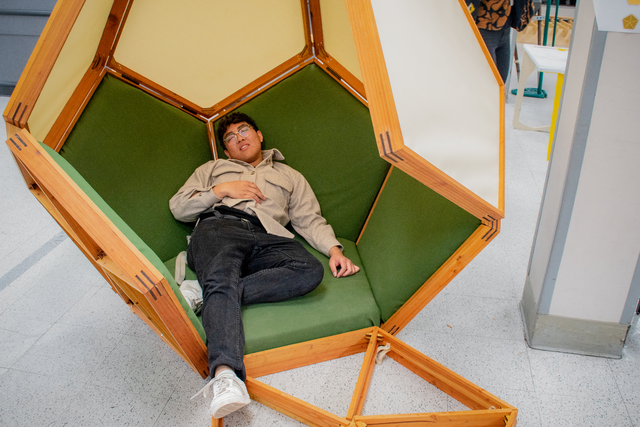 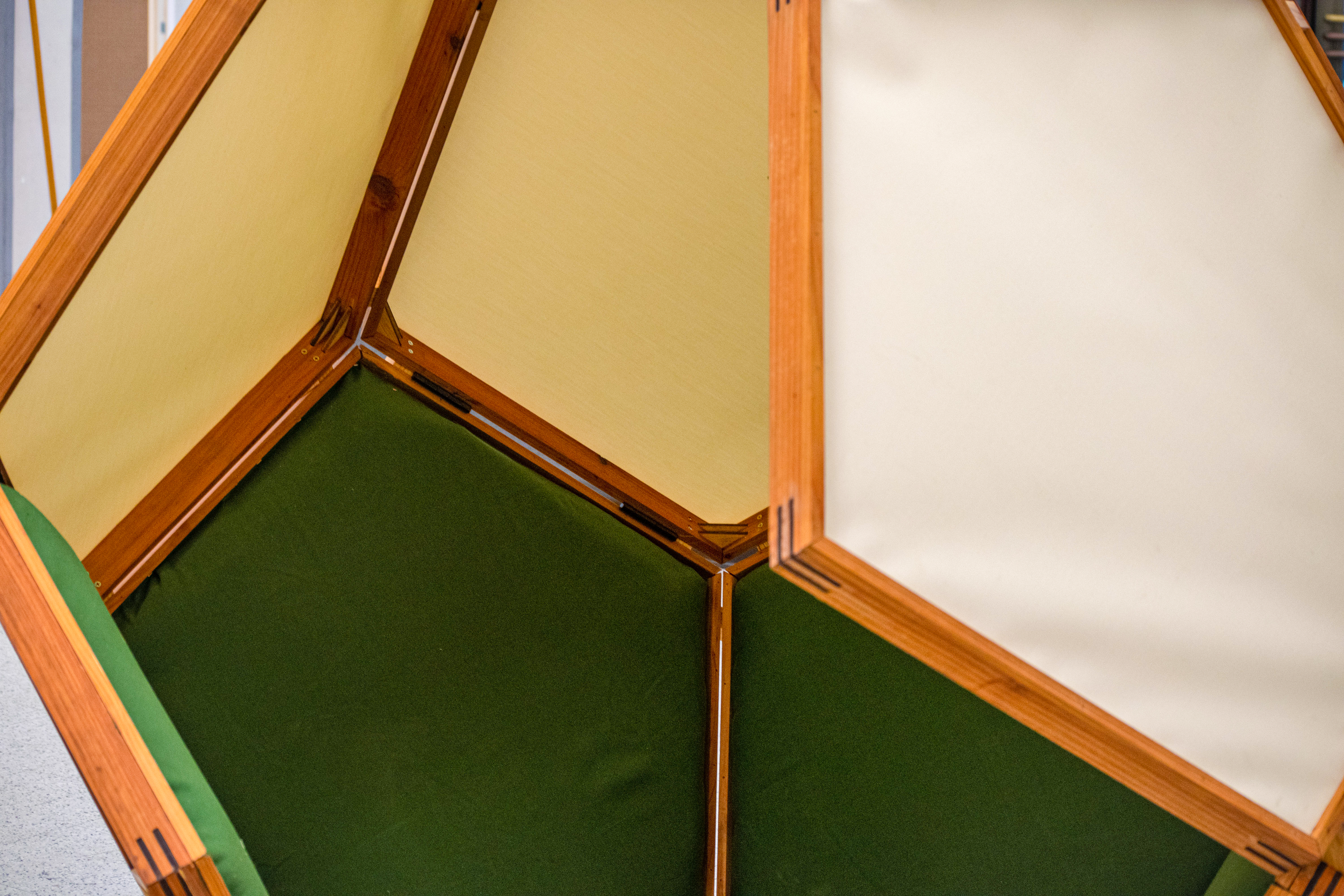 In addition to the jury-decided categories, visitors to the event vote for their favorite piece, with the winner receiving the People’s Choice award. Annebel van der Meulen earned this special honor for “Safe Space.”

The pentagonal enclosed lounge provides a sense of shelter and comfort away from the otherwise overwhelming outside world. The simple solution to the fundamental need for a place of retreat won over visitors. From children to retirees, dozens of guests enjoyed taking a moment of rest in the piece as they navigated the bustling event.

Other students recognized at the 19th annual competition include:

Several students also earned awards for the writing component of their submissions, including:

— Emma Schott, who earned the Satellite of Love book award.


Arguably one of the most notable events of the year for CAED students, Vellum allows them to work through the design process from concept to construction and showcase their work to an audience of potential employers. For upper-level students, Vellum can be a gateway to a career in furniture design. For newly enrolled students, Vellum serves as inspiration. After seeing the adroit projects submitted, many are motivated to create their own pieces and compete.

However, creating a Vellum entry requires many hours of dedicated work outside the classroom. Not only for the students but for professors as well.

“Professors involved in the program donate a lot of their time to that effort and really help the students improve the craft and design of the furniture,” Di Santo stated.

Architecture professors who do not incorporate the competition as a part of their class curriculum may provide less direct support. Contestants from these studios pursue the project independently, motivated by their craft. The project can be a challenging addition to an already demanding major. Nevertheless, students go above and beyond each year to create artful and imaginative pieces that exhibit Cal Poly’s Learn by Doing and Ready Day One philosophy.

For students looking to win next year’s grand prize, Di Santo noted that the criteria used to select the winners depends on the jury members.

“Some years, you have a jury that really favors colorful, postmodern work, and so you see those projects being elevated,” he said. “This year, we elevated a lot of conceptual projects. We are looking at the ideas. For example, you could have a really conceptual piece that is not perfectly crafted be better than a more retrospective and perfectly crafted piece.”

For future Vellum competitions, Di Santo hopes the event can keep the momentum it has maintained over the past two decades and continue providing students with this unique chance to explore the design world.

The 2023 competition has yet to be announced but will occur next year during the fall quarter. In the meantime, there will be more design-build opportunities for students, such as the upcoming Design Village competition.

Special thanks to the generous funding from Vellum Design-Build and sponsors and the dedicated effort of Di Santo and his team.

To help our students Learn by Doing and lead through practice, please consider donating by clicking here.